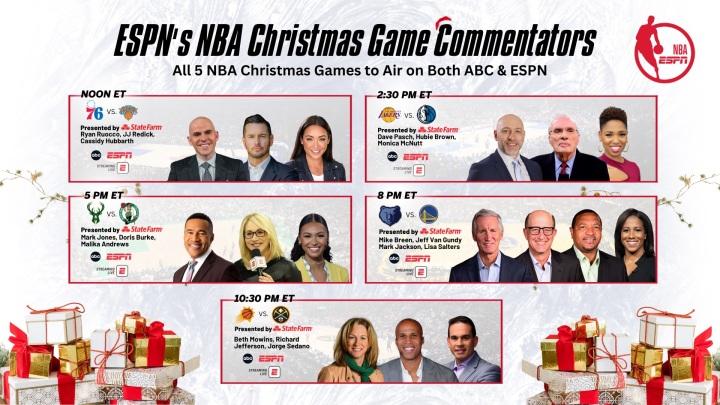 It’s the most wonderful time of year if you’re an NBA fan, with a slate of big games scheduled for Christmas Day. Outside of opening night and the playoffs, December 25 is the most illustrious day for games on the NBA calendar. It’s a showcase for the league to highlight some of its best teams and players on a national stage.

The Christmas schedule will feature five games spanning over 13 hours on two networks and one streaming service. The matchups include historic rivalries, playoff rematches, and superstar showdowns. With wall-to-wall coverage from the networks’ top talent, each game exhibits a sense of importance and significance.

There will be five NBA games on Christmas Day, December 25.

The Philadelphia 76ers will play the New York Knicks at 12 p.m. ET. The game will be played at Madison Square Garden in New York City. The announcers will be Ryan Ruocco, JJ Redick, and Cassidy Hubbarth.

The Los Angeles Lakers will take on the Dallas Mavericks at 2:30 p.m. ET. The game will be played at American Airlines Center in Dallas. The announcers will be Dave Pasch, Hubie Brown, and Monica McNutt.

The Milwaukee Bucks will battle the Boston Celtics at 5 p.m. ET. The game will be played at TD Garden in Boston. The announcers will be Mark Jones, Doris Burke, and Malika Andrews.

The Memphis Grizzlies will face the Golden State Warriors at 8 p.m. ET. The game will be played at the Chase Center in San Francisco. The announcers will be Mike Breen, Jeff Van Gundy, Mark Jackson, and Lisa Salters.

The Phoenix Suns will square off against the Denver Nuggets at 10:30 p.m. ET. The game will be played at Ball Arena in Denver, Colorado. The announcers will be Beth Mowins, Richard Jefferson, and Jorge Sedano.

How to watch NBA Christmas Day 2022

All five games will be broadcast on ABC and ESPN. Access the ABC app from your smartphone, tablet, and connected devices such as a Roku or Amazon Fire TV. The games can also be seen on your computer via ABC.com. Log in with your cable provider for full access.

To watch on ESPN, check out the ESPN app and ESPN.com. Access the app or website on your smartphone, tablet, laptop, connected TV, or video game console. Log in with your cable provider for full access.

How to stream NBA Christmas Day 2022

The first NBA game of the day featuring the Sixers and the Knicks will stream on ESPN+ as a special edition of the NBA in Stephen A’s World. Stephen A. Smith will be watching the game along with a group of special guests who will provide commentary and insight into the game. It will be the first Christmas Day game featured on the streaming service.

Watch Sixers vs. Knicks on ESPN+

Without a cable provider, there are other ways to watch the NBA on Christmas Day 2022. ESPN can be accessed on subscription live TV streaming services, such as Hulu + Live TV, YouTube TV, FuboTV, and Sling TV. Prices may vary depending on the service and package. Hulu + Live TV costs $70 per month and can be bundled with ESPN+ and Disney+. Sling TV offers Orange and Blue packages, which cost $40 per month each or $55 per month if combined. FuboTV and YouTube TV offer free trials so subscribers can try out the services before committing long-term.

As of December 20, the Bucks, Celtics, Sixers, and Knicks occupy four of the top six seeds in the Eastern Conference. The Bucks and Celtics are far and away the two best teams in the NBA, and will likely be jockeying for first place in the conference all season long. After hovering around .500 to start the year, the Sixers find themselves in the middle of the pack thanks to a five-game winning streak. Speaking of winning streaks, the Knicks turned their mediocre season around on the backs of a seven-game winning streak to catapult them out of the play-in game spot.

In the Western Conference, the Grizzlies, Nuggets, and Suns are the top three teams in the standings, while the Mavericks, Warriors, and Lakers are in the play-in game slot or on the outside looking in. However, the Warriors and Lakers will have a tougher climb as Golden State’s Steph Curry and LA’s Anthony Davis will be unavailable for the foreseeable future due to injuries.