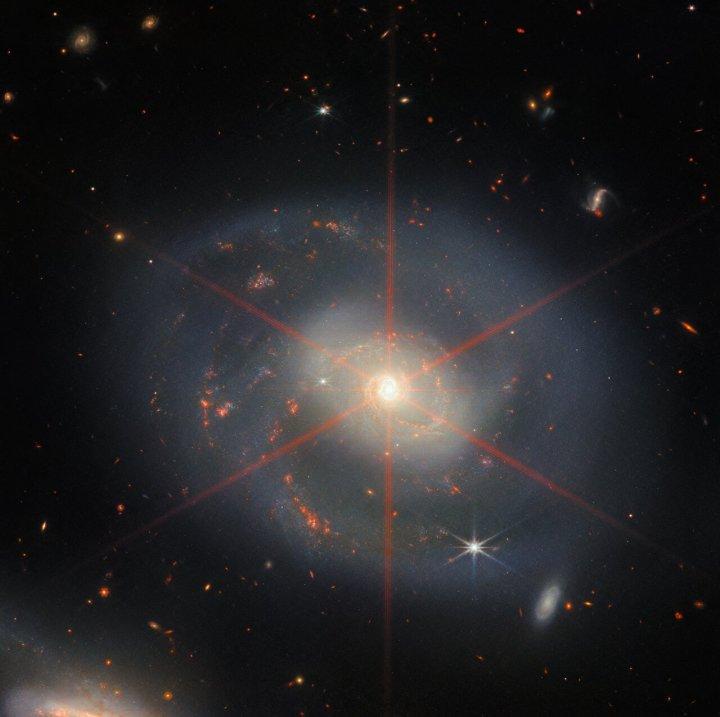 Astronomers recently shared a stunning new image of space from the James Webb Space Telescope, showing a galaxy with an unusually bright heart.

This new image is of a galaxy called NGC 7469, located 220 million light-years away in the constellation of Pegasus. It is a spiral galaxy, like our Milky Way, and is positioned such that it appears directly face-on to us. As well as this main galaxy, you can also see more distant galaxies in the background, as well as a companion galaxy NGC 5283 which is visible toward the bottom left of the image.

Perhaps the most noticeable feature of the image is the bright red star shape beaming out from the center of the galaxy, called the active galactic nucleus or AGN. This region is extremely bright as dust swirls around the supermassive black hole at the galaxy’s center, eventually falling in and giving off heat and light as it does.

“A prominent feature of this image is the striking six-pointed star that perfectly aligns with the heart of NGC 7469,” Webb scientists explain. “Unlike the galaxy, this is not a real celestial object, but an imaging artifact known as a diffraction spike, caused by the bright, unresolved AGN. Diffraction spikes are patterns produced as light bends around the sharp edges of a telescope. Webb’s primary mirror is composed of hexagonal segments that each contain edges for light to diffract against, giving six bright spikes. There are also two shorter, fainter spikes, which are created by diffraction from the vertical strut that helps support Webb’s secondary mirror.”

This region was studied using three of Webb’s instruments, the Mid-Infrared Instrument (MIRI), the Near-Infrared Camera (NIRCam), and the Near-Infrared Spectrograph (NIRSpec). This AGN is special because close by it hosts a starburst region, where stars are being formed at a fast rate. The research using Webb aims to investigate the relationship between this AGN and the nearby starburst region, and the role played by the dust between the two.