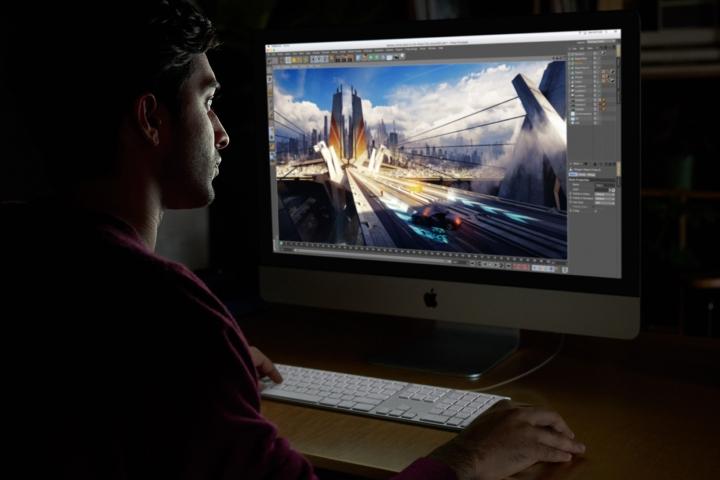 When Apple killed off the iMac Pro and then completely removed the 27-inch iMac from its online store, we thought that was the end of the road for the larger all-in-one computer. Right now, Apple only sells one size of iMac: the smaller 24-inch version. But what about that gaping hole in the iMac lineup previously occupied by the 27-inch model?

It could be that Apple decides to leave this device dead and buried and instead hopes that the Mac Studio and Studio Display scratch that itch — that’s certainly what sources at 9to5Mac have contended. But there are tantalizing clues that Apple is considering offering a larger iMac with a greater level of performance than the 24-inch iMac. Regardless of whether this is branded an iMac Pro or an iMac, here’s everything we know about the next high-end all-in-one from Apple.

At its Peek Performance event in March 2022, Apple unveiled an all-new Mac Studio and accompanying Studio Display. It also revealed that the Mac Pro was the last Mac yet to make the transition to Apple silicon. For all intents and purposes, that seemed to be the death knell for the future of larger iMacs.

That’s probably true for the iMac Pro, at least. As this was always a separate product line from the standard iMac, Apple’s announcement would seem to confirm that the iMac Pro will not get a new release date any time soon. It doesn’t necessarily hold true for the iMac, though. Since the 24-inch iMac already comes with an Apple silicon chip, it leaves open the possibility of a new 27-inch iMac (equipped with Apple silicon) coming out while still conforming to Apple’s statement that the Mac Pro was the only Mac waiting to make the transition to the Apple silicon chip.

And there’s another clue. On its website, Apple lists the 24-inch iMac as “iMac 24.” If it was going to be the only size option in the iMac family, it seems likely Apple would just call it “iMac,” as there would be no need for a differentiator. The inclusion of the measurements in the name could be read as an implication that there is another size on the way.

If that’s correct, when could we see the 27-inch iMac make a splash? Well, now that the Mac Studio and its accompanying 27-inch Studio Display are out in the wild, we can’t see a 27-inch iMac on 2022’s horizon unless something very surprising were to happen. Indeed, reliable Apple analyst Ming-Chi Kuo doesn’t believe the high-end iMac will come out until 2023. With a new 27-inch display just launched, Apple will want to give it some breathing space, which could mean a 2023 launch date for the larger iMac (if it comes out at all).

Adding to that impression is well-known Apple journalist Mark Gurman, who possesses a strong track record for Apple leaks and rumors. In early July, Gurman explained in his newsletter that he expected the larger iMac to come with the option of M3 Pro or M3 Max chips. Given we haven’t even seen M2 Pro and M2 Max chips yet (and probably won’t until late 2023), don’t expect the M3 to see the light of day until late 2023 at the very earliest. That could be the soonest time frame for the 27-inch iMac.

Gurman weighed in further in December 2022, claiming the iMac Pro had been delayed — until when exactly, we’re not sure. The reason for the delay was the same as for the next Mac Pro: high development costs and the difficulties of engineering its chips.

Interestingly, MacRumors claims Apple has tested multiple iterations of a souped-up iMac, including an Apple silicon version housed inside the Intel 27-inch iMac’s chassis, a scaled-up version of the 24-inch iMac, and a high-end edition with an XDR display, M1 Max chip, and black finish. However, none of these came to pass, perhaps owing to global supply chain issues. If true, though, it adds weight to the idea that Apple is pouring resources into a new iMac — and hopefully, that means it isn’t far from launch.

We can get some clues on the potential price by looking at Apple’s other desktop offerings. The 24-inch iMac currently starts at $1,299. On the other hand, the Mac Studio and Studio Display combined begin at $3,598. That means there’s a huge gap of over $2,000 in the lineup — at $1,599, the Studio Display alone costs more than the 24-inch iMac. So if Apple were to relaunch a 27-inch iMac, we’d expect it to have a price close to the $1,799 it had before it was discontinued. That starting price could creep up to $1,999, as the MacBook Pro line saw a similar jump when the 14-inch MacBook Pro came out. Either way, it’ll fill a gap in the pricing spectrum for Apple.

When Apple redesigned the iMac in April 2021, it brought back the classic, colorful look of the iMac G3 from 1998. The new iMac is kitted out in a range of snazzy colors, from pinks to yellows to blues, giving it a playful vibe that Apple hopes will make it down-to-earth and approachable, just like its G3 inspiration.

Will the high-end iMac get the same treatment? That likely depends on how Apple positions it. If, as expected, it’s simply branded as a larger version of the 24-inch iMac, then bright colors are all but guaranteed. It would simply be an extension of the existing model, so maintaining the color continuity would make sense.

If, on the other hand, Apple brings back the iMac Pro nomenclature, then the colors are out. Apple’s Pro devices usually come in muted, “professional” colors like gray and silver. A pro-grade machine clad in bright pink or yellow shades would likely feel out of place. However, given Apple’s statement on how many devices are yet to make the switch to Apple silicon, we don’t consider iMac Pro branding to be likely.

A colorful outlook was not the only makeover the iMac got in April 2021 — it was also made radically thinner. Will this slimline design remain with the larger iMac? We think there is a good chance. Given how efficient Apple silicon chips are and how little space the SoC takes up compared to a system that uses discrete GPU and memory modules, it’s possible the larger iMac will not need to beef up to accommodate it.

Still, the iMac Pro’s shape depends a lot on the chip that powers it. The 24-inch iMac felt like the first Mac that was designed around the benefits of Apple silicon, but that does not mean its higher-end sibling will go the same way.

Apple was working on monstrous 32-core chips, but it looks like those might have been scrapped. Previous rumors had also suggested the M1 Ultra or a high-end M2 chip could find their way into the 27-inch iMac, but both now look highly unlikely.

That’s because Apple is now not expected to launch the new, high-end iMac for some time. Journalist Mark Gurman is predicting it will probably come with the choice of an M3 Pro or M3 Max chip, which is still some distance away.

Those chip choices make a lot of sense. The current iMac uses an entry-level M1, so equipping its larger sibling with the next chips in the line-up (rather than the super-high-end Ultra chip) would give potential users a simple choice without creating too much of a gulf between the various iMac sizes.

Whatever happens, it’s almost certain that Apple will forgo a discrete graphics card in the 27-inch iMac. Apple is clearly confident in the abilities of its own chips, as even the maxed-out, highest-end Mac Studio retains the in-built graphics of the M1 Ultra.

The current iMac sits at 24 inches across, up from the 21.5-inch model it replaced. That increased size came from Apple reducing the bezels around the edge of the screen. If Apple launches a larger iMac, it is almost certain this will get the same treatment as its 21.5-inch counterpart and have its screen size shifted up a notch. Our money is on something in the 30- to 32-inch range. Alternatively, Apple could stick with a 27-inch display but reduce the size of the chassis housing it by cutting down the bezels.

We might not get a greater screen resolution than the old 27-inch iMac’s 5K offering, though. The 24-inch iMac comes with an impressive 4.5K resolution, while the current 27-inch Studio Display sits pretty at 5K. While previously we expected the resolution to increase — that’s what happened to the smaller iMac, which went from 4K to 4.5K, after all — the introduction of the Studio Display with a 27-inch 5K display suggests that might not be the case. Apple’s Pro Display XDR (the monitor made for the Mac Pro) has a 6K resolution, but it weighs in at 32 inches across, so 5K at 27 inches seems like the sweet spot for Apple.

We might see more than just an impressive resolution, though. To augment the increased pixel count, we would not be surprised if Apple brought its mini-LED XDR brand name into play as it did for the latest iPad Pro. This brings a huge contrast ratio and peak brightness, as well as key techs like ProMotion and HDR support. Display industry expert Ross Young has stated his belief that the larger iMac would come equipped with a mini-LED panel and 120Hz variable refresh rate. That would really help set it apart.

Everything else we expect to see

Touch ID has been around on Macs for years, but it only came to the iMac’s Magic Keyboard in April 2021 as part of the midrange $1,499 offering. That makes it a dead cert for the higher-end iMac when it releases, giving the quick convenience of logging in and verifying purchases with a touch of your finger.

Alternatively, Apple could supersede Touch ID with something even better: Face ID. We know the company is working on adding this secure login tech to the Mac thanks to a smattering of patents — the only question is whether it is ready to go. Given the chaos that the coronavirus has caused in the industry, Face ID seems unlikely. Never say never, though — reliable reporter Mark Gurman says Face ID is on the way. While that statement was made in January 2021 and the iMac has clearly been delayed since then, it implies Face ID might not be too far from prime time.

Finally, iMac fans will have been heartened to see the 2021 MacBook Pro get much more port variety, including the return of the HDMI slot and SD card reader. Given the professional audience who might be attracted by a larger iMac — and the variety of peripherals and devices they use — the next top-end iMac is likely to have many more ports than just the USB-C slots offered on the current entry-level iMac. With that in mind, the new MacBook Pro models could offer a sneak peek at the ports that are coming to this device.