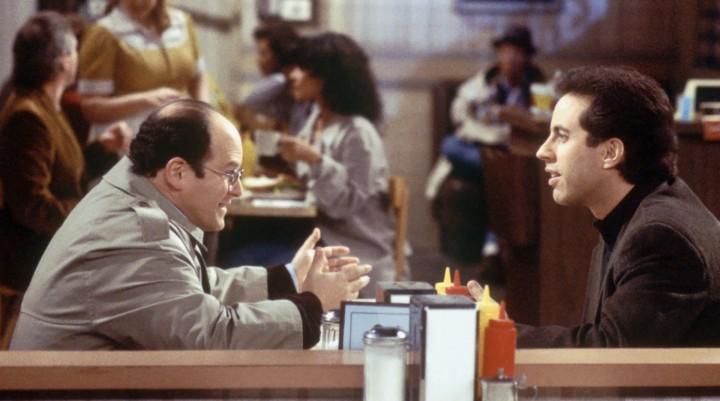 It has been 24 years since Seinfeld went off the air, but the iconic show’s cultural staying power is still hanging around. In the post-ironic comedic landscape of our current times, it is startling how the laugh-track-driven relic has lived on in the millennial consciousness, immortalized by memes, Twitter threads, and its prominent place on Netflix.

Yet until recently, I had never watched Seinfeld despite being surrounded by a pop culture that is shaped by it. My rewatch of the show’s nine seasons not only filled me in on what I missed, but gave me advice I didn’t know I needed and showed me who I was, who I wanted to be, and who I could’ve become if I followed the sarcastic wit and wisdom of Jerry, George, Elaine, or Kramer.

I knew nothing about the show about nothing

I knew half of all common catchphrases of everyday life came from the show’s nine-year run, but the task of actually watching it felt way too daunting. All it took was a summer of boredom, a chaotic firing at my first job out of college, and a desire to fully immerse myself in a time far away from my present reality when I wasn’t sending job applications into the ether. Oh, and a girlfriend who kept telling me to watch it.

This was a girlfriend I had been with for years, through the trying ending years of college and through the chaos of a post-college global pandemic. And now as I had stumbled my way through my stressful first year in New York City, it was a relationship that was starting to feel like it was hanging by a thread made of old memories and familiarity.

And amidst the anxiety surrounding my relationship, fledgling career, and day-to-day future, I started the show. And when I start a show, no matter what show, I have to watch the whole thing straight through in order. No matter how long it takes.

Immediately, even in the wobbly opening season, I felt seen in the actions and decisions of Jerry Seinfeld, George Costanza, Elaine Benes, and even Cosmo Kramer. Ignoring the 90’s datedness of the technology in which the characters’ neuroses and cynicism traveled, the content felt relatable even if the modes did not. Most damningly, I felt I had been stuck in a George-esque thought pattern for some time.

The first “a-ha” moment came in the first episode of season 2, The Ex-Girlfriend, where George does not know how to break free of a relationship. As I sat next to my girlfriend, with whom it had become increasingly difficult to have real conversations, Jerry tells George to just do it like a band-aid, one motion, right off!

I turned to look at her and turned away before she looked back. It was too stomach-churningly real to even watch. As the seasons progressed and the show started to hit its sweet spot, I realized every minor life crisis I was going through was experienced by the characters many times over.

Looking for jobs felt like George going through his limited interests and skill sets on the couch. Daily aimlessness felt like being lost in the parking garage. I was spending more time with these lunatics than with my own friends and family, and I was starting to draw life lessons from them.

The wit and wisdom of Cosmo Kramer

I told myself I was no longer going to be a George, I was going to be a Kramer: somebody who was out there, experiencing life and all of its eccentricities, highs and lows, and embracing them. I wanted to move out of my head and into the public sphere. And when I finally ripped off the band-aid, I became fascinated with Elaine’s radically independent spirit and alternation between finding partners and finding ways to escape them. Jerry had the least to write home about, but the way in which people gravitated towards him despite his general nonchalance felt like something to aspire to.

As the seasons changed, it belatedly dawned on me that these characters were not role models. They were smug (Jerry, the smuggest), self-absorbed and noncommittal. But I realized I was less desiring to be these characters than to live their lives, to be in their universe.

Here was a New York where every day when you walked out the door you were bound to have a bizarre interaction with a living, breathing person. Here was a New York where failures and disappointments were a daily occurrence but something to shrug off and forget almost instantly, because there will always be a new opportunity to make a fool of yourself.

Here was a New York that forced you to grow a thick skin, where even a passenger in their own life can hone sophisticated social tools. Don’t regift. Don’t double dip. And maybe, just maybe, don’t park in the handicapped spot.

For a generation of twenty-somethings growing up in the shadow of COVID, Seinfeld is a different world, one where there still is a reason to leave your apartment every day, whether to pretend to do work at your office or to pick up possible dates in real life. And while it may be safer, both health-wise and emotionally, to shut yourself from the chaos going on outside, it sure does not seem as fun as reliving the day’s madness with your closest friends.

As the weather got colder outside, I started to grow into my independent, New York self. Landing a new, exciting, fully in-person job with people my age talking around a water cooler helped; as did therapy. (Not for George.) I was living a life that could have happened in Seinfeld, the only difference was, I felt as though I was learning, maturing in some way.

Taking off my new “work coat” and sitting down for episodes late into seasons seven and eight, I realized the gang was actually starting to annoy me. “No hugging, no learning,” is of course the show’s modus operandi. But it was strange that this show that taught me so much about basic human interaction consisted of characters who never grew whatsoever.

Even as they started to age, there was no sign of a next phase in life being reached; and they had already started out the show much older than I was. It got to the point where they were unable to resist pointing out their own stasis.

After Larry David left the show in season seven, the social observations dried up and the show became focused on upping the absurdity level, sucking the rest of the cast into a Kramer-esque funhouse mirror of reality.  The most egregious example, or at least one of many, is when Kramer hosts his own late-night talk show in his living room with Jerry, Elaine, and Newman as guests. How was this like everyday reality?

Moving on and looking back

By the series finale, six months after my early sweat-drenched anxious forays into the universe, I was more than ready to move on. I felt more akin to the various cast of supporting characters, well-adjusted and not, who dropped by just to testify to the craven amorality of the fabulous four. I had reached a turning point; I was no longer Jerry or Elaine, I was Will, a slightly neurotic writer who was now merely observing a beloved show instead of mimicking it.

But even if they could never improve as people, Jerry and the gang somehow made an impact on me. Whether it was learning what not to do, or what to say or not say, Seinfeld introduced millions to a new comedic language derived from essential truths of everyday human interaction. In New York, in your twenties, relationships, career paths, and even friends may come and go. But each one is worth documenting, for its heartbreak or for its humor, easier found in retrospect.

I feel like a completely different person from when I started watching the show in June. And even as I outgrew it, I would not have chosen anything else to help me track a transformational, tumultuous period in life, because there is a television series worth of life experience out there for all of us, just waiting to be written.

You can stream all nine seasons of Seinfeld on Netflix.