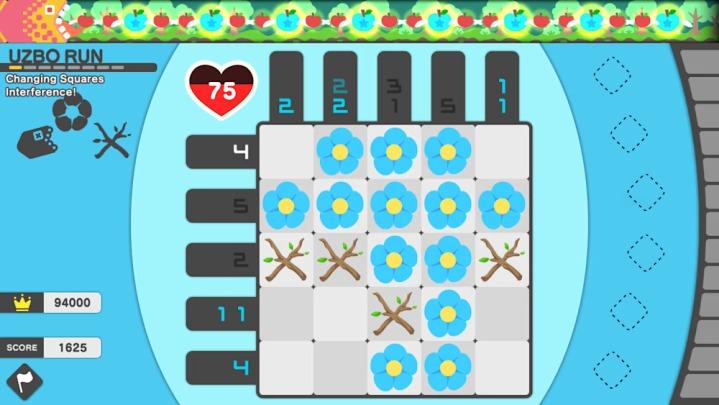 It’s late December. You’ve spent the entire year trying to keep up with a flood of games. In fact, you’re probably still trying to work your way through that exhausting backlog as you crush late-year releases like The Callisto Protocol and High on Life. Perhaps you just want to take a break from it all and play a smaller game that’s well off the beaten path while on your holiday vacation.

If you fit that description, allow me to introduce you to Picross X: Picbits vs. Uzboross. It is pure chaos.

Released this week on the Nintendo Switch eShop, Picross X is another puzzle collection from developer Jupiter. The studio specializes in Picross games specifically, which is a puzzle format that has players filling in grids by using number clues in each column and row. Picross is usually a relaxing kind of game that takes a lot of patience and a bit of math.

Picross X throws all of that out the window entirely. This version is all about solving puzzles as fast as humanly possible. Levels consist of a gauntlet of 5×5 puzzles that players need to speed through quickly — I’m talking two seconds a pop. It starts simply enough, but levels introduce new complications along the way. Some puzzles may ask players to fill out columns in a set order, while others will invert the puzzle and ask players to remove squares from a fully filled-in grid. Some gimmicks are even more complicated, like one that removes the gridlines or another that floods the screen with dog paw prints as you try to solve puzzles.

There’s a point to all this, albeit not one that’s going to make this sound any less absurd. The more puzzles players solve during a level’s time limit, the more attack power their boxy avatar and its pals gain. Each level ends with a boss fight against a snake creature, turning all acquired points into damage. The faster you can solve puzzles, the better chance you’ll stand against it.

It’s a fun formula shake-up for Picross experts who have found themselves bored of a puzzle format that doesn’t often see iteration. The fast-paced approach provides a good challenge for people who usually zip through early puzzles in Jupiter’s Picross games. The little distractions provide some brain-busting moments too, testing players’ puzzle literacy. Though its hook can get repetitive after a long session. I’ve already found myself hooked as I try to smash my high scores.

What I’m especially impressed with here is how complete a package this is — something that Jupiter’s usual Picross games don’t always strive for. Not only does it include a sizable story mode with 10 worlds, but it also features local and online multiplayer where up to eight people work together to rack up damage for a collective boss fight. It also has an avatar customization suite (complete with lots of unlockables), a solo challenge mode, and a skill system that has players equipping and leveling up different buffs.

If you love strange games that strive to be unlike anything you’ve played before, Picross X fits the bill. It’s a simple puzzle game, an action-RPG, and a blazing-fast speedrun game rolled into one colorful package. While I won’t promise that you’ll love it, I can confidently say that you won’t be bored if you check it out.