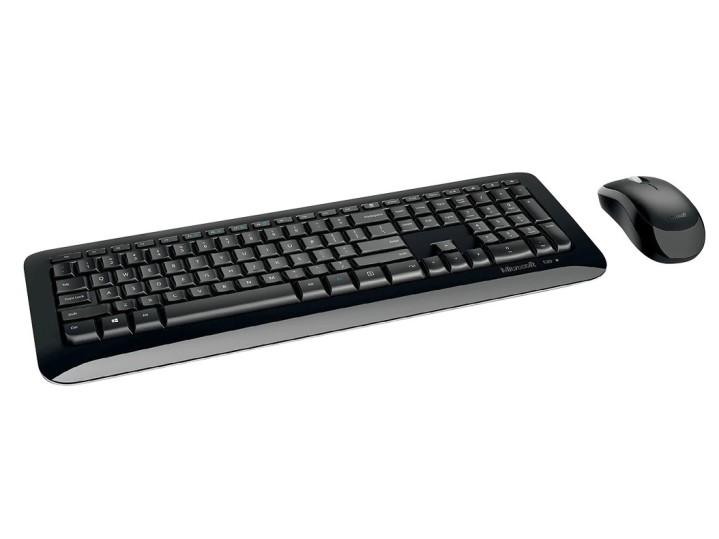 Nothing quite beats the clicky and tactile feel of a mechanical keyboard, especially if you’re doing a lot of typing. If that built-in laptop keyboard is leaving you feeling a bit boxed in and your fingers are cramped after doing a lot of typing, then it’s time to upgrade your setup (and your workflow) with a nice wireless keyboard. Your wrists will thank you and so will your wallet, because you don’t have to spend all that much to get a good set of keys under your hands. We’ve already rounded up all the best wireless keyboard deals in one place so you can dive right in.

These discounts feature some keyboard bundles with mice included, but if you need to buy of those separately or need some other stuff to outfit your workstation, check out these wireless mouse deals, headphone deals, and monitor deals, too.

This full-size, 109-key keyboard includes a numeric keypad and comes with a matching wireless mouse. They utilize AES 128-bit data encryption for wireless transmission — keeping signals secure — and up to a 30-foot range. It’s great as a backup keyboard and mouse combo, or for travel use with a laptop or business computer.

Excellent for everyday productivity and casual tasks, this keyboard, and mouse combo feature 128-bit advanced encryption for data transmission. The design is lightweight, relatively portable, but also thoughtful — making them a joy to use.

Offering incredible battery life, up to 36 months with a single set of batteries, this keyboard and mouse combo is flexible, lightweight, and yet precise. Mouse DPI support extends from 1,000 up to 4,000, depending on how sensitive you need the pointer to be. You can also customize the keyboard thanks to 12 programmable keys. It uses Bluetooth wireless, with the standard 128-bit advanced encryption for data transmission. Also, the set works with Windows, Mac, Linux, Chrome, and Android OS devices.

This tactile keyboard is illuminated with Razer’s Chrome RGB technology, fully customizable with 16.8 million colors to choose from, along with a host of visual effects. It supports three different modes of connection, including low-latency, Bluetooth, and a detachable USB-C cable — the cable is for charging the keyboard too. It offers up to 200 hours of battery life on a single charge, Razer green mechanical switches, which are extra clicky, and a compact form factor.

A beginner’s guide to wireless keyboards

Paired with a desktop monitor and a wireless mouse, a wireless keyboard can turn any laptop into the ultimate home workstation. The type of keyboard you opt for will depend entirely on your needs. If you’re after something to get some work done during the day before kicking back in the evening to battle to the end in Fortnite, you’ll probably want something a little more high-end with mechanical switches. These result in a faster response — less time between you clicking the button and the character on the screen executing the action. Many popular gaming keyboards feature this design.

Now, what about us mere mortals who are just after a keyboard to get down to business? There are a couple of different options. Something cheap will almost always do the trick, offering the wire-free typing experience that so many of us crave. Increase your budget a little bit and you’ll get near-enough to the same hardware, but the keys won’t be as loud and loose. Pivot to the top-end and you’ll take home a keyboard with some resistance. These deliver the most satisfying typing feedback as you have to press with at least an ounce of force to make the word you’re thinking of appear on the screen.

Plus, there are a couple of unique characteristics that wireless keyboards can have. Some are collapsible, meaning they fold in half for easy transportation. We recommend staying as far away from these as can be. Unless you’re parting with an awful lot of cash, they’re often poorly made, and rattle around as you type. In a more positive light, some wireless keyboards come with a built-in numeric keypad (we aren’t kidding — they still exist!). These are particularly useful if you spend a large chunk of your day immersed in Microsoft Excel or some other software where numbers are all the rage.

Do wireless keyboards need to be charged?

That depends on the type of wireless keyboard you have. Some run on disposable batteries. These don’t need to be charged. Others run on solar power. These don’t need to be charged, instead requiring natural light to recharge (if your workstation is not in a place that gets a lot of natural light, though, then these are best avoided). The final type use rechargeable batteries, which — surprise, surprise — need to be recharged. This can usually be done using a USB cable and typically recharging doesn’t see them out of action. They just won’t be wireless, so to speak, while they’re hooked up to a power source.