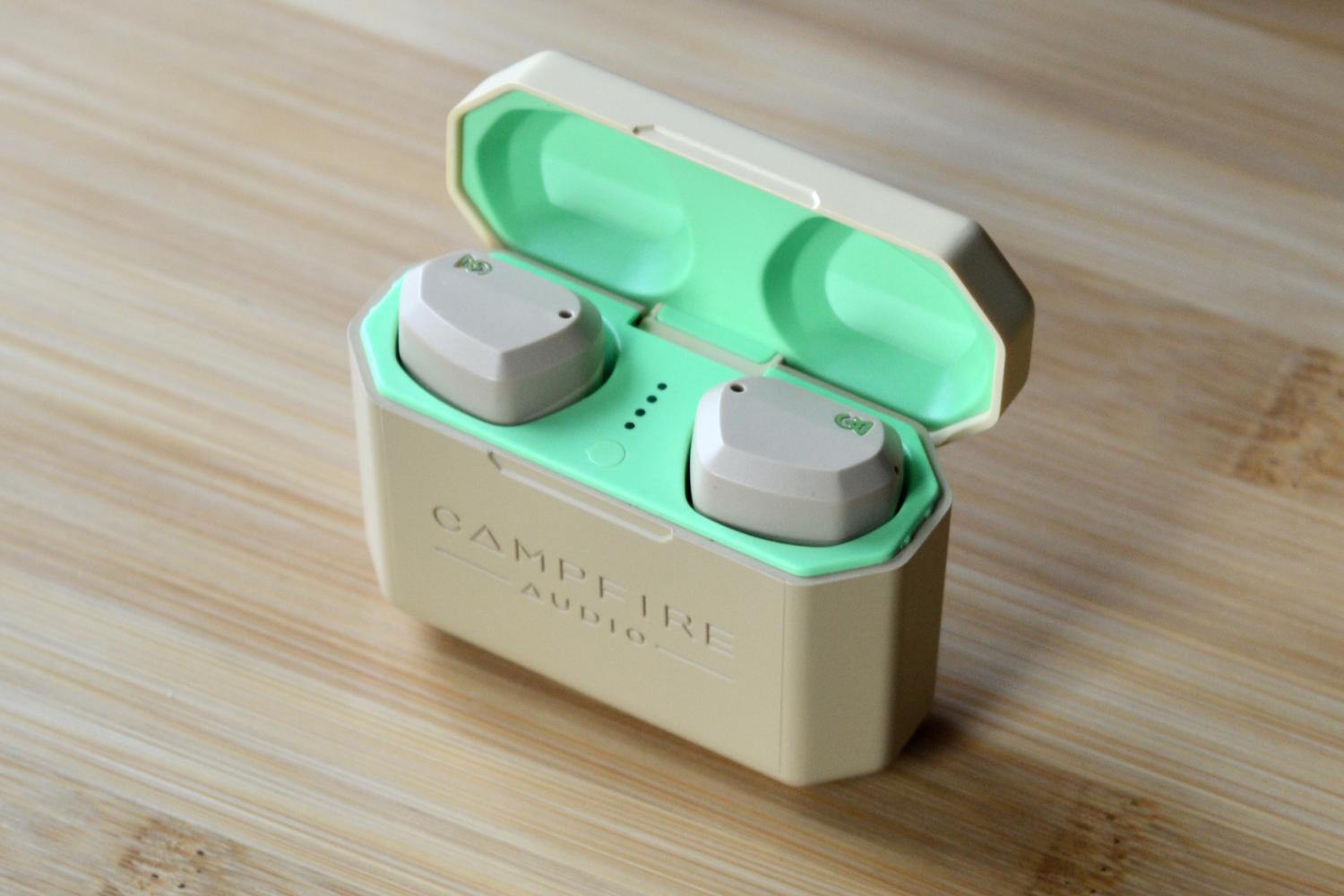 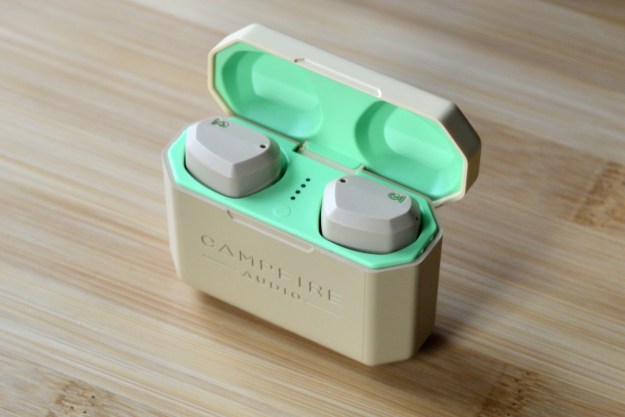 Campfire Audio Orbit review: out of this world sound

“The Orbit eschew lots of features for big, powerful sound.”

Some wireless earbuds offer the extra peace and quiet of active noise cancellation (ANC). Some are designed to endure rough use and workouts, with lots of water and dust protection. And some are loaded with extra features like Bluetooth multipoint, head-tracked spatial audio, heart rate tracking, and the ability to locate them easily should they go astray.

Campfire Audio’s very first set of wireless earbuds — the Orbit — offer none of these things, and yet they command a fairly hefty price: $249. This puts them shoulder to shoulder with well-equipped models like Apple’s AirPods Pro Gen 2 and Sennheiser’s Momentum True Wireless 3.

But Orbit has a trump card of sorts. Portland, Oregon-based Campfire Audio has a reputation for creating top-quality in-ear monitors (IEMs) — wired earbuds that professional musicians and audiophiles adore. If the Orbit can deliver sound quality that outshines anything else at this price, maybe newcomers and brand loyalists alike will overlook a lack of additional features. Are the Orbit truly the best-sounding wireless earbuds for the money, or should you stick with a more established player? Let’s check them out.

Campfire Audio has never been shy about creating designs that stand out from the crowd. Its IEMs often come in vibrant colors like Day-Glo orange, and its more expensive models (which can cost as much as $3,375) use exotic materials like gold and diamond-like carbon, as well as multifaceted shapes. This approach is visible in the Orbit’s design, too: the case and earbuds are both multifaceted, but with softened edges and corners that make them comfortable to hold and wear.

Photos of the Orbit can be deceiving. Their chunky appearance makes them look big, but the case is only slightly larger than that of the AirPods Pro, and considerably smaller and more pocketable than the case for the Sennheiser Momentum True Wireless 3. They’re also incredibly light — just 1.5 ounces for the whole package, compared to the AirPods Pro’s 2.1-ounce weight.

I don’t personally care for the Orbit’s coffee-and-cream color scheme with mint-green accents, but my Gen Z daughter assures me they are absolutely on point, so I have to give Campfire full marks for staying on trend.

On a more practical note, however, the Orbits can be tricky to remove from their case. The case lid only opens just a tick more than 90 degrees, and the earbuds don’t give you much to grip, so I struggled a bit.

You can charge the case wirelessly, or via USB-C. With a measly 4.3-inch USB-C to USB-C cable included, Campfire clearly assumes most of its customers will charge via their laptops.

The touch controls are responsive and easy to use. A single tap on either side will play/pause or call answer/end, while double taps are used for track skipping, triple taps bring up your voice assistant, and tap-and-hold adjusts the volume. What you don’t get is any kind of music auto-pause — the Orbit lack the wear sensors that have become standard on most earbuds.

Campfire’s companion app will let you disable any commands that you don’t need (which might help prevent accidental taps), but there’s no way to change what each gesture does. The app can also be used to see battery levels, update firmware, and adjust EQ — more on that part later.

Getting them paired was easy, and their Bluetooth connection proved stable the entire time I was using them, but I did encounter one hitch. Despite supporting aptX Adaptive at 24-bit/48kHz on compatible devices, I couldn’t get my Xiaomi 12 Pro to acknowledge this capability — it insisted on using aptX Classic. Here’s hoping that Campfire can fix this with a firmware update.

Campfire claims an IPX5 rating for water protection on the Orbit earbuds, which should be enough to keep them from damage if you want to use them for workouts, as long as you wipe them clean afterward. But I found they simply didn’t fit me securely enough for any kind of serious activity.

While the Orbit are very comfortable, I just couldn’t keep them from moving around — and not for lack of trying. All of the needed ingredients are here, including three sizes of silicone eartips, and three sizes of memory foam eartips. But this generous selection couldn’t compensate for the Orbit’s combination of a blocky body and a short spout (the part that’s covered with an eartip and sits in the opening of the ear canal).

I just couldn’t get the tips to sit deeply enough to create a seal that prevented the earbuds from shifting unless I sat relatively still. When on walks or at the gym, they required frequent readjustments.

In fairness, the foam tips were far more secure than the silicone sleeves, and for some folks, they’ll prove to be a good solution. However, the foam tips seemed to adversely affect the sound quality for me — they boosted the bass while muffling some of the mids and highs — so I switched back to the silicone.

And, minor gripe here, Campfire should have included one of its tiny cleaning brushes. The spout’s grill sits flush against the eartips’ openings, which is great for sound, but a real problem when it comes to debris like earwax getting caught between the openings.

When I got the Orbits to sit correctly, I thoroughly enjoyed their sound. Campfire has taken a bit of a risk with the Orbit’s tuning: the earbuds have a very big and bold, bass-forward presence that audiophiles will find overbearing, but I think a lot of folks are going to love it. The company calls it a “North of Neutral” sound signature, and it’s a departure from the far more neutral or flat EQ of its $199 Satsuma IEMs.

I like a healthy low-end thump as long as it’s balanced with clear mids and highs, and the Orbits achieve that balance. Sonically, they’re very similar to Sony’s superb WF-1000XM4, but the Orbits exhibit even more power. You may not fully appreciate it until you fire up a track like Mindflip & Merkules’ Run My Shit, and that lovely low-end bass begins to rumble through your skull.

It’s not always ultra-precise: On a track like Dire Straits’ You And Your Friend, the Orbits have no trouble placing Mark Knopfler’s guitar on the right side of the soundstage, where it exhibits its classic twang, but it’s not quite as clearly rendered as on the XM4.

Still, the Orbits are a really fun and dynamic listen — I found them more lively and exciting than both the AirPods Pro and the Momentum True Wireless 3.

If you’re not entirely happy with the factory tuning, the app gives you seven EQ presets to choose from, and the ability to add your own with seven discrete frequency sliders. But it’s an odd user experience. Most EQ presets are labeled according to the genre they’re designed to enhance — rock, pop, classical — but Campfire simply numbers its presets 1 through 7, which can make it tricky to remember what each one does, and trickier still to remember your favorites.

With the silicone sleeves, I was content to listen with no EQ tweaks at all, but with the foam tips, I reached for the custom EQ tool and reduced the bass and mid-bass frequencies, while giving the mids and highs a bit of a boost.

Speaking of those different tips, with the foam installed, the Orbits handily dealt with most external sounds passively, and at these times, a transparency mode would have been helpful. Conversely, when using the silicone — which lets in more sound — I found myself wishing for ANC, especially when outside, near traffic.

Phone calls and video meetings are fine on the Orbits — your voice will come through loud and clear, and with almost no distortion or wobble. However, that’s only true if you’re in a quiet spot. In louder locations, the mics really struggle to keep background sounds at bay, and your voice may at times almost completely disappear in windy conditions.

One nice thing about not needing to power a bunch of extra features is that the Campfire Audio Orbit have very good battery life: a claimed 8.5 hours per charge, with an extra 30 hours in the case. That’s more than enough for anything but the most extended periods away from a charging source. I found that if I kept the volume at 50%, which is a perfectly acceptable volume level on these earbuds, I got very close to (or maybe slightly under) these numbers.

So should you buy them? I think they’re overpriced considering how many features Campfire Audio has left off the table. Let’s recap. The Orbit cost $249 and they do not have:

And then there’s the potentially problematic fit. You won’t want to wear earbuds that have a tendency to keep falling out.

But there’s no denying that the Orbit sound fantastic, with a level of audio quality that’s arguably better than most earbuds at this price or less, especially for those who enjoy a bass-forward, bold sound signature. If you’re looking for wireless earbuds that go above and beyond on both sound quality and distinctive design, and you’re OK with what’s missing, I think you’ll have a blast with the Campfire Audio Orbit.