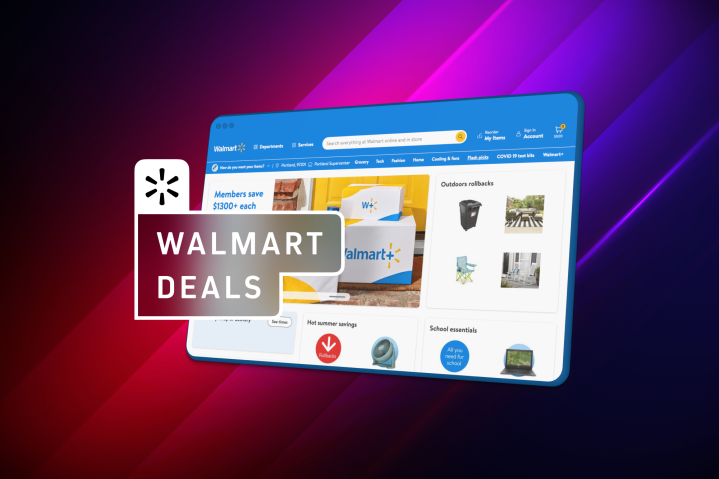 If you’re still scrambling for holiday gifts, you’re in luck! Walmart has started a holiday sale for some last-minute Christmas and New Years shopping, so it’s the perfect time to pick up something for yourself, your friends, or your family. While there are a lot of deals at Walmart, we’ve collected five of the best deals we think you’ll love.

When the first Apple Watch SE came out, it was a bit of a surprise since we didn’t tend to see budget-oriented Apple products. Even better, it’s a surprisingly good smartwatch, with an excellent 1.78-inch Retina screen display running a 326 pixel-per-inch density and overall smooth performance. It doesn’t skimp on the health tracking features either, with everything from workout to sleep tracking, although you sadly don’t get electrocardiogram or blood-oxygen monitors. Luckily, it has a heart rate sensor, so it’s still valid for fitness use, making it one of the best Apple Watch deals if you want something inexpensive that lives inside the Apple ecosystem.

The Xbox Series S was a little bit of a letdown when it first came out, but the last couple of years of development have truly unlocked its potential. Compared to the Series X, it’s digital only, so you can’t use discs, and it’s about half as powerful under the hood in terms of specs. Even so, the Series S is ideal for gaming on 1080p, with barely any noticeable difference between the Series S and Series X, especially with more stylized games like Ori and the Will of the Wisps. Granted, it’s not great if you want to play in 4k, but if you aren’t running that sort of resolution, then a Series S is the better option, at least if you need a budget option. Be sure to also check out some of these excellent video game deals while you’re at it!

If you want one of the best headphone deals on the market right now, this one from Walmart is probably it. The Bose QuietComfort 45 is one of the highest-end consumer headphones you can grab that isn’t an Airpods Max or a Sony WH-1000XM5. It has industry-leading active noise canceling, just a notch below the previously mentioned, and is lovely, especially if you’re familiar with Bose’s beautification and are a fan. They have a very comfortable fit, which is great since the 24 hours of battery life will likely make you not want to take them off. Luckily, there’s a great transparency mode that gives you some awareness of your surroundings and even enough to have conversations.

While the Lenovo Ideapad 3i’s marketing makes it seem like a great gaming laptop, its specs imply that it’s targeted to business, educational, or general use, and it’s honestly great at it. It has an Intel i3-1115G4 CPU under the hood, which is an entry-to-mid-range processor that can handle most day-to-day tasks. The RAM is slightly on the lower side at 4GB, although with smart app management, it won’t be too big a problem. Storage is also smaller than we’d like at 128GB, especially since Windows 11 Home will grab roughly 30GB of that, so we’d suggest grabbing one of these external hard drive deals. Still, with a 14-inch FHD display, this is one of the better laptop deals if you want something budget-oriented for your daily driver.

It’s not always easy to find great TV deals on 65-inch TVs, but luckily Walmart has a nice little deal on this Vizio V-series. If you aren’t familiar with Vizio, they’re a budget-oriented TV brand that’s started getting into the luxury market recently, as you can tell by this TV. So, for example, not only is it 4k, but it also has HDR 10, HDR 10+, and HLG, the last of which is what most sports broadcasters use, so if you watch a lot of sports, this TV is perfect. It also has an AI 4k upscaler so you can watch older content without issue, full-array backlighting, and 10ms input lag for those of you who want to game on it, a voice remote, and a ton of other great features that is great for a sub $500 TV deal!