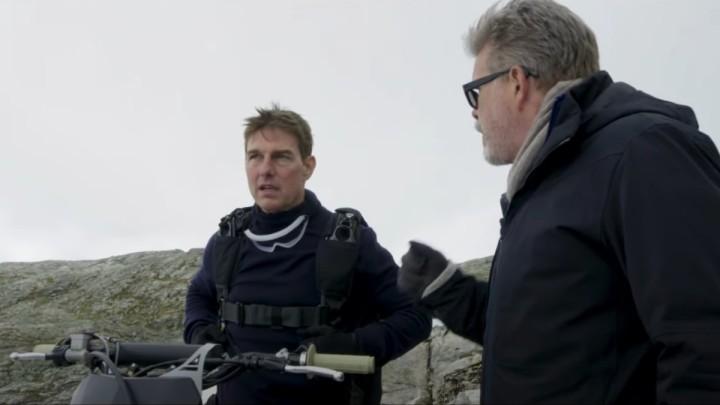 Tom Cruise thanked fans yesterday for their support of Top Gun: Maverick after jumping out of a plane and completing a solo freefall dive. Yet, that wasn’t the craziest thing captured on camera as Mission: Impossible – Dead Reckoning Part One (also known as Mission: Impossible 7 or M:I 7) released a behind-the-scenes look at the “biggest stunt in cinema history.”

The 9-minute video brings the audience back to the first day of shooting M:I 7 in September 2020 when Cruise prepared to jump a motorcycle off a cliff, complete a base jump, and parachute to safety. While the stunt seems out of this world, Cruise calmly says that he’s wanted to do this since he was a “little kid.”

For a stunt that took seconds to complete, it took well over a year of preparation and training. Cruise had to perfect base jumping, skydiving, canopy control, and motocross before he could even practice the jump. Cruise completed over 500 skydives and 13,000 motocross jumps in preparation for the stunt. Countless hours of practice on a model ramp were needed to calculate the speed and angles of Cruise’s jump so writer/director Christopher McQuarrie knew where to put each camera. When it came time to complete the stunt in Norway, in true Tom Cruise fashion, he did it not once, but six times.

Dead Reckoning Part One will be the seventh installment in the Mission: Impossible film franchise. Alongside Cruise, Ving Rhames, Simon Pegg, Rebecca Ferguson, Vanessa Kirby, and Henry Czerny will reprise their roles from the previous M:I films.