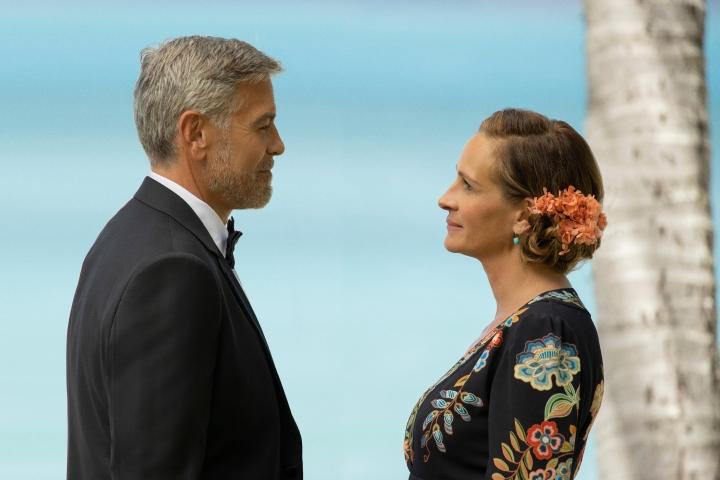 Rom-coms are a dime a dozen these days. Boy meets girl, girl hates boy, boy pursues girl, girl begins to like boy … well, you know the rest. There are very few romantic comedies that stray from this formula, which may be why the genre is in the box-office doldrums at the moment.

The one exception in a sea of underperforming romantic comedies was Ticket to Paradise, the Julia Roberts/George Clooney movie that became a sleeper hit in fall 2022. Roberts, in particular, is a veteran of the genre, and audiences couldn’t get enough of watching her navigate love’s perilous dance once again. Now that it’s hitting homes nationwide, where can one watch it?

Where can you watch Ticket to Paradise?

After its lucrative theatrical run, Ticket to Paradise is coming to a familiar streaming service: Peacock. Launched in 2020, Peacock is the home to NBC Universal and Comcast properties such as Universal Pictures, the Olympics, Bravo, and Saturday Night Live.

Peacock is the home to popular NBC shows like The Office, This Is Us, Law & Order, and Brooklyn Nine-Nine. The service boasts many sports programs from the WWE, NFL, and Premier League as well. Peacock has also expanded its scripted and non-scripted original programming, including shows like Vampire Academy, Dr. Death, and a documentary about Casey Anthony. In addition, it’s home to blockbuster movies like Nope and modern rom-coms like Bros.

When does Ticket to Paradise stream for subscribers?

Ticket to Paradise is now streaming on Peacock.

Stream Ticket to Paradise on Peacock

There is no fee to sign up for the most basic level of Peacock, and there is no credit card required upon signing up. All that’s needed is an email address for users to access 10,000-plus hours of content for free. The free tier is very limiting in terms of content. If you would like to access more programs from Peacock, there are various paid tiers to explore.

Peacock Premium is the first paid tier on the streaming service, with access to over 80,000-plus hours of entertainment for a monthly price of $5, or $50 per year. This tier contains ads, but allows users to access new films and live events. If this tier is too restricting, users can upgrade to Peacock Premium Plus, which costs $10 per month, or $100 per year. Premium Plus includes everything from Premium, but contains no ads and allows users to download and watch programs offline.

Is Ticket to Paradise worth watching?

If you’re looking for escapist fare with a couple of old-fashioned movie stars, Ticket to Paradise is just the, ahem, ticket. The movie doesn’t do anything new, but what it does, it does well, and that’s thanks to the warm chemistry between Roberts and Clooney, who seem to be having a ball trading barbs, and stolen glances, at each other in a literal paradise.

On Rotten Tomatoes, Ticket to Paradise sits at 57% on the Tomatometer and registers a 88% audience score.