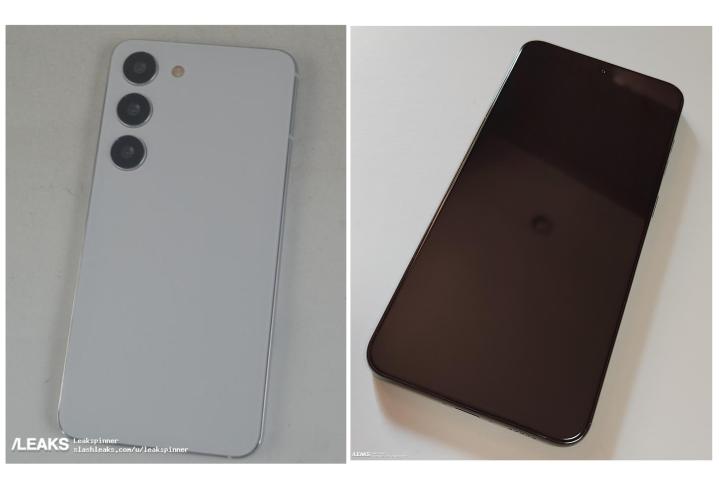 As the launch of the Samsung Galaxy S23 draws ever closer, we’ve been starting to hear more and more rumors regarding its specs, as well as get glimpses of its design through product renders. Now, hands-on pictures of “dummy units” (nonfunctional versions of the devices) for the Galaxy S23, the S23 Plus, and the  S23 Ultra have leaked online — and they confirm a lot of what we’ve heard about the design of the S23 line.

According to the images posted to Slashleaks, the base Galaxy S23 is ditching the more rounded edges of Galaxy phones past and instead is adopting a squared-off design with round corners.

This is in line with the renders we’ve seen of the S23 previously and seems to confirm the rumor that it’s getting an all-new internal frame. Another major change from the S22 is that the three rear cameras now protrude slightly out of the phone’s back instead of being flush with its casing. It’s a pretty standard look for smartphones across the industry, however, with the protruding cameras and the more square design, the S23 can almost be confused with the Galaxy A32.

The Galaxy S23 Plus looks nearly identical to the base S23 except in terms of size, which was to be expected. Samsung seems to be sticking to the tradition of keeping the design of Plus models of its phones identical to their smaller counterparts

The leaked images of the Galaxy S23 Ultra, however, are a different story. As previously reported, the S23 Ultra looks remarkably similar to the S22 Ultra — to the point where one could almost confuse the two for one another. Unlike the S23 and S23 Plus, no changes have seemingly been made to the edges of the device, meaning that it looks pretty distinct from the base S23. Instead of the round corners and square edges, it still sports rounded edges and sharp corners.

Obviously, these aren’t official images from Samsung, so there’s no way to know how legitimate these images are for sure until there’s word from the company. The photos do line up with a lot of the rumors we’ve heard about the smartphone in recent leaks, so there’s a possibility that the final design could be exactly what we’re seeing here.