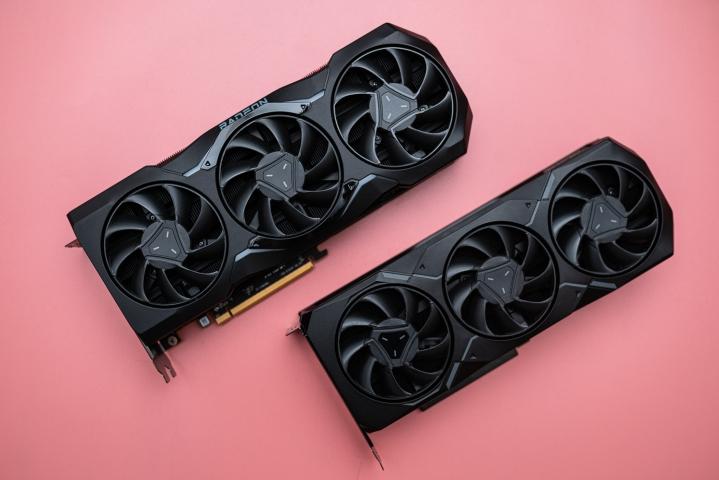 AMD’s latest Radeon RX 7000-series is Team Red’s response to Nvidia’s RTX 40-series. For Nvidia, the current reigning leader of the pack is the RTX 4090, an expensive, but immensely powerful GPU. In the case of AMD, we have two cards sitting near the top — the RX 7900 XT and the RX 7900 XTX. How does AMD’s new headliner, the XTX, compete with Nvidia’s flagship?

If you’re wondering which GPU will reign as the best of the best, you’ve come to the right place. We’ve tested both cards extensively and we know the answer.

Nvidia’s flagships are known for a lot of things, but being cheap is not one of them. The Nvidia GeForce RTX 4090 was released on October 12, 2022, and the basic Founders Edition model costs $1,599. Custom versions made by Nvidia’s partners, such as MSI, Gigabyte, and Asus, cost more, nearing the $2,000 mark in some cases.

The GPU sold out quickly at most retailers despite the eye-watering price tag. Scalpers are attempting to resell it, charging a fairly high markup, so you may not be able to score an RTX 4090 for the recommended price just yet. Hopefully, over time, the price will normalize.

AMD is usually slightly more reasonable than Nvidia when it comes to the pricing of its products, and this holds up when it comes to the new lineup. The RX 7900 XTX is certainly more agreeably priced. First announced on November 3, the GPU was released on December 13 and priced at $1,000. For reference, the not-quite-flagship RX 7900 XT was released on the same day with a $900 price tag.

This makes the new AMD flagship much, much more affordable, but there are still other things to factor into your consideration, such as the specifications and the performance of both the Nvidia and the AMD cards.

The new AMD Radeon RX 7900 XTX belongs to AMD’s latest RDNA 3 lineup, was built on a 5nm process, and houses a Navi 31 XT GPU die. AMD went with an interesting new approach, similar to that used in the Ryzen 7 5800X3D, and used a 5nm graphics compute die (GCD) as well as a 6nm memory cache die (MCD) in the same GPU, stacking them on top of each other. This lets the GPU pack more punch, assisted by the massive 96MB of Infinity Cache.

Unfortunately, although the RDNA 3 powers do give the 7900 XTX a considerable boost over its predecessor (the 6900 XT), it’s not a match for Nvidia’s behemoth of a GPU. The AMD flagship is positioned against Nvidia’s RTX 4080 instead.

Here’s how the two flagships compare in terms of specifications.

We’ve had a chance to test both the RTX 4090 and the RX 7900 XTX extensively, including in gaming tests as well as synthetic benchmarks.

The verdict is clear — both GPUs have their strengths, but the RTX 4090 is a very powerful card and easily the best one on the current market. However, it’s expensive, and there aren’t many games that can take proper advantage of its intense capabilities.

Nvidia’s flagship is capable of smoothly running AAA games at max settings and at 4K. It even proved itself by running Genshin Impact at 13K, which, although impractical, is a pretty insane feat. The AMD Radeon RX 7900 XTX, on the other hand, is a powerful graphics card that’s perfectly suited to 4K gaming, but it can’t hope to compete against the RTX 4090 where pure performance is concerned.

Nvidia’s RTX 4090 also grants access to supreme ray tracing capabilities and the latest DLSS 3 that can conjure up entire frames instead of just pixels. All of that adds up to fantastic gaming performance, albeit at a high price.

Historically, AMD has not been as good at ray tracing as Nvidia, and this still proves to be true in this generation. We’ve put both cards through the wringer by playing Cyberpunk 2077 in 4K at maximum settings with ray tracing enabled. The RTX 4090 made it quite playable at 42.9 fps, but the RX 7900 XTX lagged behind at just 21.5. The gap is not just due to the fact that the 4090 is simply a higher-tier card, because the RTX 4080 fares better with 29 fps. Simply put, AMD may have honed its ray tracing skills this generation, but Nvidia has nothing to worry about in this regard.

However, AMD has placed its bets heavily on performance-per-watt and performance-per-dollar this time around. As a result, it’s a fairly balanced GPU, and if found around the recommended price, it’s excellent value for 4K gaming. As you can see on the above chart, the RX 7900 XTX has the lowest price per frame when you consider its MSRP.

It depends on your needs

The answer should come as no surprise — Nvidia will retain its spot atop the list of the best graphics cards available right now, and until Nvidia itself releases a follow-up to it (such as an RTX 4090 Ti), that likely won’t change.

The RTX 4090 is an insanely powerful GPU, capable of handling most things you could imagine. On the other hand, it’s expensive, and it hasn’t avoided controversy during its (still short) run. It’s a massive card, and the cable that comes with it can’t handle bending, meaning that there have been instances of the power connector and cable melting when under pressure. Sure, this problem only seems to affect a small percentage of RTX 4090 owners, but it’s still a problem entirely avoided by AMD, seeing as it isn’t using the 12VHPWR connector that seems to be the culprit in Nvidia’s case.

AMD’s RX 7900 XTX was never meant to be a competitor to the RTX 4090. With that said, it’s still a great graphics card, and it provides excellent value when the price is close to $1,000. If you don’t care too much about ray tracing. but still want a GPU that can breeze through 4K gaming, the AMD card is a great alternative to both the RTX 4090 and the 4080.

If you’re asking yourself which GPU to get, the answer depends on how much you want to spend and how much you really need the kind of top-shelf performance provided by the RTX 4090. If you’re trying to go for better value, get the RX 7900 XTX. If all you want is great performance, the RTX 4090 is definitely a stronger GPU.