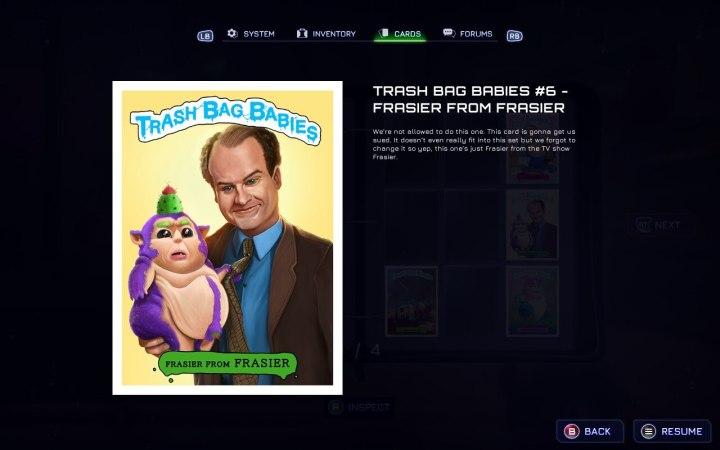 The recently released High on Life is full of hilarious pop culture references, from nods to Metal Gear Solid to fully watchable 90s movies. My favorite joke, however, comes from a legally dubious Frasier joke (that I probably shouldn’t be drawing attention to).

The gag is easy to miss, as it’s tied to a hidden collectible. Throughout High on Life, players can find Trash Bag Babies trading cards. As you might have guessed, these are a not-so-subtle riff on Topps’ old Garbage Pail Kids trading card line. Each features a different alien kid with their own name and flavor text describing their whole deal.

The most notable card in the series is #6: Frasier from Frasier. There’s no clever, veiled reference here; it’s literally just a card depicting Frasier Crane from Cheers and Frasier. At first, you may wonder if Squanch Games is even allowed to include a drawing of Kelsey Grammer in its game. The card’s flavor text implies that the studio doesn’t really know either.

“We’re not allowed to do this one,” the card reads. “This card is gonna get us sued. It doesn’t even really fit into the set but we forgot to change it so yep, this one’s just Frasier from the TV show Frasier.”

If you want to find Frasier and put him in your own collection, you can find the card in the Old Town location. Once you exit the portal, you’ll find it on one of the rooftops in the town (use the zipline above your head to get to it). Just make sure not to tell anyone once you find it. We wouldn’t want Squanch Games to get sued.

High on Life is available now on PC and Xbox via Game Pass.