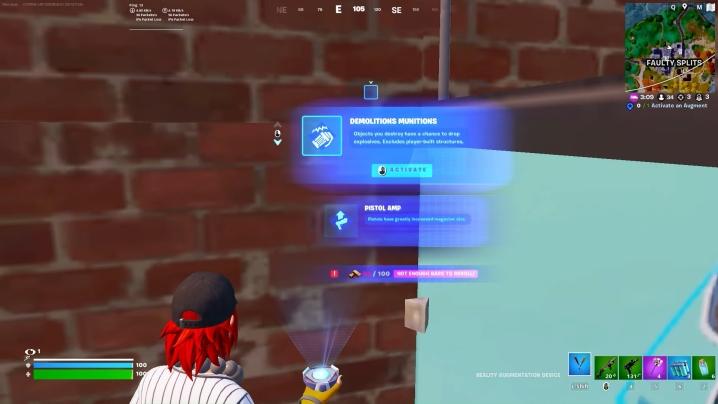 Every new chapter of Fortnite is a massive event. While seasonal changes bring plenty of minor tweaks and additions, it’s almost always when a new chapter rolls around that major overhauls or new mechanics are introduced. Fortnite Chapter 4 is no exception, and aside from the extreme changes the island has undergone, there’s one very important change to gameplay that will make a huge difference when going for that victory royale.

Augments, well, augment the game. There are a few challenges that somewhat introduce what these are, but they leave out almost all the important details for you to find out on your own. Augments need to be considered, and deeply understood, not only for when you get them yourself but to know what new tricks your opponents could have up their sleeves. Before you get taken by surprise, here’s a complete breakdown of how to unlock augments and how they work in Fortnite.

Augments, or Reality Augments, are essentially a new perk system introduced into Fortnite. There are currently 22 augments in the game, but with more to come in future updates. You can get access to multiple augments during a single match, but augments do not carry over after a match is finished, whether you win or lose. These perks can range from modifying certain weapon types to granting buffs for performing actions, and much more. There are no bad augments, so you will want to get as many as possible.

Augments also have their own tab in your menu where you can see which ones you’ve had so far to track your progress using them all.

How to get and use augments

Unlike guns, items, and most things in Fortnite, you won’t be finding or looting augments on the map itself. Instead, augments are dished out to all surviving players over the duration of a match. At around two and a half minutes into a game, you will be given the choice between two augments to place into one of four slots. After picking your first, so long as you survive and the game doesn’t end, you will get another pair to pick between every two and a half minutes or so. If you’re trying to complete the augment tab, pay attention to the augments with the word “new” beside it to indicate it being one you’ve never taken before and unlock it.

If neither of the two augments presented looks good, you can also hold the interact button at the bottom to reroll your options. You can reroll once for free, but if you have to do it again it will cost you 100 gold bars.

However, even if an augment is passive, you still need to activate it. To do this, press right on the D-pad (or your platform’s equivalent) to open the augment menu, highlight which one you want to use, and activate it with the right trigger.

Here are all 22 augments in Fortnite so far and what they do: