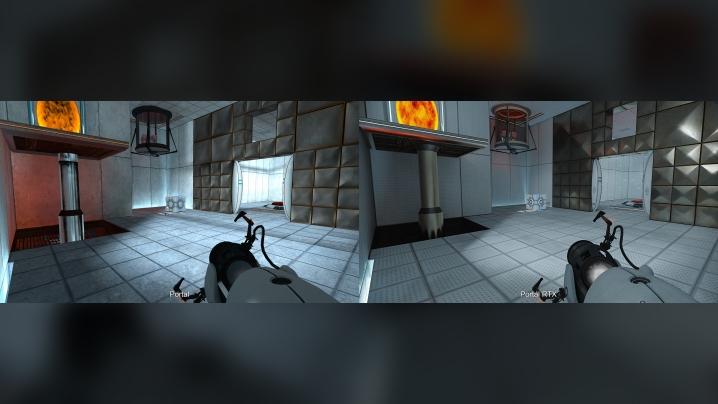 You probably won’t be able to run Portal RTX. I’ll just get that out of the way upfront. Based on the most recent Steam hardware survey, I’d estimate less than 10% of PCs are even capable of running Portal RTX, and it’s closer to 4% if we’re talking about any reasonable frame rate and resolution.

Portal RTX is the most demanding game I’ve tested, and running it is only possible with clever image reconstruction techniques and the fastest GPUs on the market today. Ray tracing is taxing, but it’s how Portal RTX is leveraging ray tracing that makes it the next-gen benchmark I’ve been waiting for.

Way more demanding than you think

Portal RTX is way more demanding than you probably think. Even two years after launch, Cyberpunk 2077 is the most demanding game in my GPU benchmark suite, both with ray tracing on and off. Even Metro Exodus Enhanced Edition, which uses full ray-traced global illumination, is leagues easier to run than Cyberpunk 2077.

But Portal RTX is even more taxing. For reference, you can see how the RTX 3070 held up with Nvidia’s Deep Learning Super Sampling (DLSS) set to Auto in Portal RTX below. In both Cyberpunk 2077 and Portal RTX, I used the same DLSS mode and the highest ray tracing quality preset.

Portal RTX is a showcase for Nvidia’s next-gen graphics cards like the RTX 4090, and in particular, the unique frame-generation capabilities of these GPUs with DLSS 3. Even with free frames, Portal RTX taxes the RTX 4080 much more than Cyberpunk 2077 does.

The question is why? Portal is 15 years old at this point, and even with updated assets and rays bouncing around, surely it couldn’t be more demanding than the dense, vibrant open world stuffed with ray-traced lighting that’s available Cyberpunk 2077 (or countless other games with ray tracing).

But it is, and there’s a good explanation for why.

Why Portal RTX is so taxing

Portal RTX uses path tracing, which you might see Nvidia refer to as “full ray tracing.” That alone isn’t the reason Portal RTX is so demanding — it’s how Nvidia is utilizing path tracing to trace all of the lights throughout a scene, as well as the shadows, reflections, and refractions those lights introduce.

Path tracing works by tracing a line out from your camera. It goes in a straight line until it hits an object, bounces, and continues on, eventually going back to the light source. The complications come up with how different objects handle light. Some of that light is absorbed, other light is reflected, and some breaks off as a refraction. Multiply this across every pixel and introduce multiple bounces (which Portal RTX does), and each frame becomes a complex string of math that’d make anyone’s head spin.

Modern AAA games with ray tracing don’t go through all of that hassle. A prime example is Dying Light 2‘s ray-traced flashlight. It traces rays where the flashlight hits a surface and bounces them around the room, creating a soft glow in dark areas where that lighting ends up. Critically, it doesn’t cast shadows, nor does it pick up the color properties of objects the flashlight interacts with.

These limitations are necessary shortcuts for a game as grand as Dying Light 2. It’s using ray tracing to enhance certain features in the game. Portal RTX is using ray tracing to simulate light. Path tracing brings all of the disparate aspects of how light behaves in an environment under a single roof, and ends up much more demanding in the process.

Cyberpunk 2077 takes plenty of shortcuts, too. In ray-traced reflections, for example, the game calculates some of the data from typical screen space reflections (SSR) depending on what’s being reflected. In addition, post-process elements like street fog don’t carry light further into the scene. That’s not the case in Portal RTX, as you can see in the screenshot below. The blue cast from the hallway travels throughout the scene due to the soft fog and casts blue light far beyond the hallway.

Nvidia is no stranger to path tracing, showcased by the Quake II RTX demo. But Nvidia says Portal RTX includes four times as many bounces as Quake II RTX and Minecraft RTX, leading to a much more demanding (and physically accurate) showcase of light.

Portal RTX is built on Nvidia’s RTX Remix modding toolkit, too, allowing it access to features that weren’t available in previous tech demos and that we don’t see in typical ray-traced games. The feature you’ll notice first is RTX Direct Illumination (RTXDI), which allows any light in a scene to cast path-traced light and shadows. In the scene below, I’ve highlighted four areas where RTXDI is at play: the yellow switch on the floor, the orange glow from the stairs, the red glow from the button, and the blue light from the window.

The other is — get ready for it — Reservoir Spatio-Temporal Importance Resampling Global Illumination, or ReSTIR GI. Nvidia has a research paper that goes into the gritty details, but the short of it is that ReSTIR GI takes multiple samples from critical light paths instead of tracing more paths. Despite what the performance above may suggest, this is actually more efficient and allows Portal RTX to trace more bounces than it would’ve been able to.

Put together, Portal RTX is a glimpse at what may be possible in vast open-world games like Cyberpunk 2077 and Dying Light 2 in the future. It takes shortcuts, but it still serves fully simulating light in a scene.

A challenge for next-gen GPUs

When the RTX 4090 was announced, we criticized it for not having any games to push the GPU to its limit. Portal RTX is that game. The intense ray tracing plays an important role, of course, but the 2007 release has also been overhauled with physically based rendering (PBR) materials, new assets, and a few fun Easter eggs.

Portal RTX doesn’t tarnish the classic with overly reflective surfaces and nonsensical lighting like Quake II RTX did. It’s a beautiful game and the perfect excuse to revisit Aperture Laboratories. It’s just unfortunate that so few will be able to run the game.

Unfortunately, that leaves other GPUs out in the cold. Portal RTX doesn’t currently work with Intel’s Arc A770 and A750, and AMD’s GPUs are too behind in ray tracing to hold up (even at the high end). Nvidia was kind enough to include a temporal upscaler to use with non-RTX GPUs, but that’s not the main issue facing Portal RTX. It’s how demanding the game is even with upscaling on.

The good news is that Portal RTX is an unlikely showcase of what next-gen looks and performs like. We’ve had the same batch of demanding titles for a few years now. Who would’ve thought that a quaint, two-hour puzzle game with a little ray tracing would be the one to challenge the status quo?

This article is part of ReSpec – an ongoing biweekly column that includes discussions, advice, and in-depth reporting on the tech behind PC gaming.