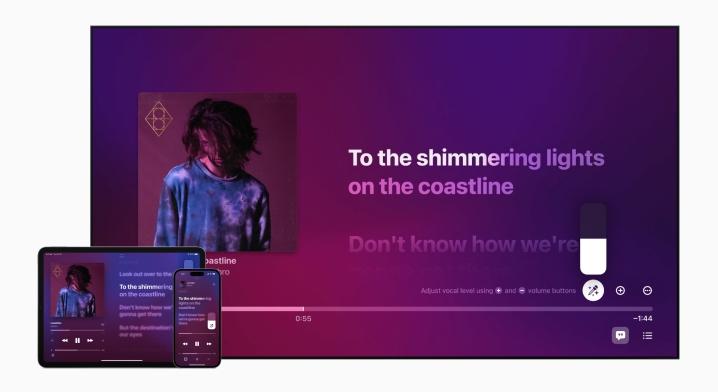 Apple wants you to sing like everyone’s listening with its new Apple Music Sing feature, a karaoke mode that works with the music streaming service’s popular lyrics experience.

Available later this month on iPhone (11 and later), iPads (third-gen and later), and the 2022 model of Apple TV 4K (not earlier models, for some reason) to really max out the karaoke experience in living rooms, Apple Music Sing will be incorporated right into the Apple Music app, giving you the option to use a slider to control the volume of the vocals in Apple Music’s song library so you can sing along. With the slider, you can tweak the volume to either blend your voice with the singer’s or drop them out completely to go solo. Background vocals are also viewable independently from the main vocals for budding backup singers to follow more easily, and a Duet view separates multiple singers’ lyrics on opposite sides of the screen.

Using the feature is pretty straightforward. Just go into the Apple Music app’s lyrics view where you’ll see a microphone icon that you can tap to will show the volume of the vocal track — which Apple says is separated using machine learning to isolate the vocal and deliver the lyrics in real-time. Apple Music then highlights the lyrics being sung with “precise timing.”

Apple also is planning on launching a series of more than 50 dedicated Sing playlists with titles such as “Epic Choruses,” “Festive Favorites,” “Iconic Duets,” and “Party Anthems.”

“Apple Music’s lyrics experience is consistently one of the most popular features on our service,” Apple’s vice president of Apple Music and Beats, Oliver Schusser, said in a press release. “We already know our users all over the world love to follow along to their favorite songs, so we wanted to evolve this offering even further to enable even more engagement around music through singing. It’s really a lot of fun, our customers are going to love it.”

The announcement follows on the heels of Apple’s year-end roundup of the year’s most listened-to music with its Apple Music Replay 2022, which was somewhat eclipsed by rival Spotify’s own Spotify Wrapped 2022 list and, even more so, by the weird and wonderful Instafest app, which allows music fans to tap into their Spotify music data to create fun Coachella-style festival posters featuring all their favorite acts.