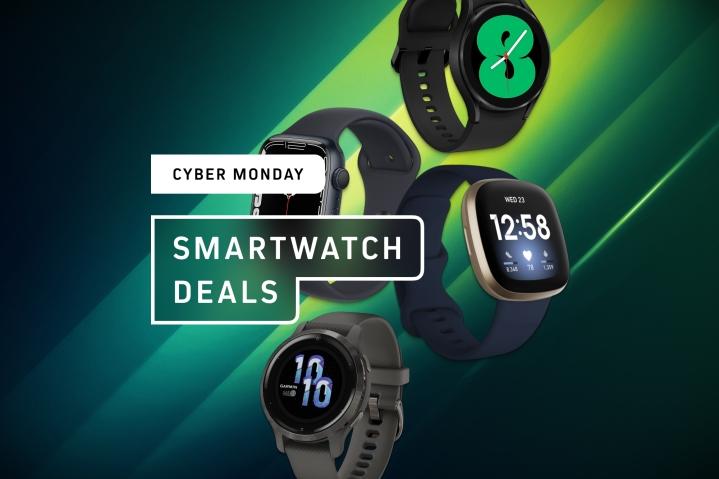 When the first-generation Apple Watch SE was released in 2020, we described it as the best Apple Watch for most people. While a lot of things have changed since then, including the launch of the second-generation Apple Watch SE, the original budget Apple Watch remains a worthwhile purchase in the Cyber Monday smartwatch deals for iPhone owners who want to try what it’s like to own a wearable device. The smartwatch offers comprehensive health-tracking features and responsive performance, while also providing you with notifications from your iPhone.

Made by a mainstay on our list of the best fitness trackers, the Fitbit Versa 4 is a health-focused smartwatch that recognizes more than 40 exercises and records your statistics from them, while also monitoring your heart rate for any irregularities. Between the Fitbit Versa 4 and Fitbit Versa 3, the newer version reintroduces the physical button, improves Google integration with Google Maps and Google Pay features, and upgrades the operating system.

The second-generation Apple Watch SE improves upon its predecessor in virtually every way. The differences between the Apple Watch SE 2 and Apple Watch SE include 20% faster performance with its S8 SiP chipset, an updated accelerometer and gyroscope for improved fall detection, and the addition of crash detection utilizing motion sensors and an advanced sensor-fusion algorithm. The smartwatch is also water resistant up to a depth of 50 meters.

The Samsung Galaxy Watch 5 looks similar to its predecessor, but it comes with a larger battery, faster charging, improved durability, and better accuracy with its health-tracking features. The smartwatch offers body composition analysis, heart rate monitoring, and advanced sleep coaching, for a comprehensive snapshot of your overall health. With the Galaxy Watch 5’s sapphire crystal glass, you won’t have to worry about it when you go through even the most intense of workouts.

The Google Pixel Watch, Google’s first foray into the smartwatch space, utilizes Fitbit’s fitness tracking technology to monitor metrics such as the calories you’ve burned, your heart rate, and your sleeping patterns. The device is very comfortable to wear with its smooth and ergonomic case, and the curved screen with no physical bezel makes swiping easy. The Google Pixel Watch is easily compatible with other Google devices, such as the Google Pixel Buds Pro and Nest smart home devices.

The Apple Watch Series 8 is our top choice among the best smartwatches, and it’s probably the target for most shoppers who have an eye out for Cyber Monday smartwatch deals. The sleek design and gorgeous always-on display help it stand out from other wearable devices, but its true selling point is what you can find inside. Powered by watchOS 9, the Apple Watch Series 8 offers a comprehensive suite of health and activity features, including new additions such as crash detection, a Backtrack feature that will help you retrace your steps if you get lost, and temperature sensors.

The Apple Watch Ultra is the largest Apple Watch in the market with a sharp and colorful 49mm Retina LTPO OLED screen, and it’s as durable and luxurious as they come with its titanium case, sapphire crystal glass, and ceramic case back. The orange Action Button is a new addition — it activates Workout mode by default, but you can customize it to launch other functions. The Apple Watch Ultra features a 76% larger battery compared to the Apple Watch Series 8 and Apple Watch SE 2, which will let you maximize the capabilities of watchOS 9.