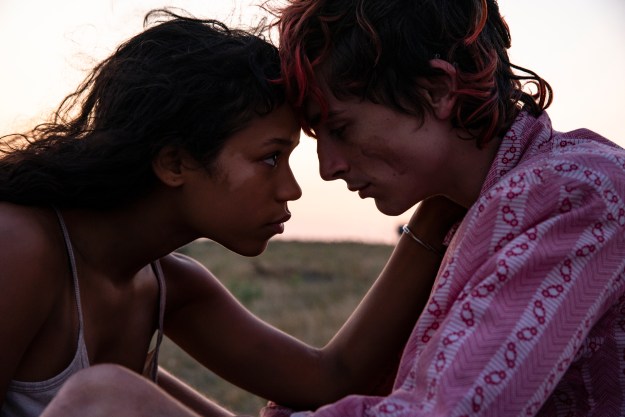 “Bones and All is another achingly romantic, occasionally horrifying film from director Luca Guadagnino that doesn’t quite manage to hit the same highs as some of his previous efforts.”

Bones and All is a curiously twangy, blood-stained addition to the canon of American road movies. The film, which was shot on location in Ohio, reunites director Luca Guadagnino with his Call Me By Your Name star, Timothée Chalamet, on an adventure that takes the latter’s young, conflicted character across multiple midwestern states. Joining them on the trip is Taylor Russell, a long-promising young star who is, at long last, given the spotlight she deserves in Bones and All, which casts her and Chalamet as a pair of nomadic cannibals struggling to find a place in a world populated by humans who, understandably, have little interest in being eaten.

In many ways, Bones and All feels like an inevitable mixture of the romance and horror genres that Guadagnino has played around with in the past. Its achingly romantic story feels akin to the forbidden romance the Italian director explored in Call Me By Your Name, while its instances of blood-soaked violence inevitably call to mind the moments of body horror present in Guadagnino’s 2018 reimagining of Suspiria. However, despite all its technically impressive parts, there’s something missing in Bones and All, a film that feels surprisingly tame given the contents of its story.

Based on a 2015 novel by Camille DeAngelis, Bones and All follows Maren Yearly (Russell), a young girl whose cannibal urges eventually force her to set out on her own when she turns 18. While on a journey to find her absent mother, Maren crosses paths with Lee (Chalamet), a fellow cannibal who has grown used to the nomadic lifestyle for similar, if slightly more brutal, reasons as Maren. The two quickly grow close, committing to a romance that’s based as much on understanding as it is on Maren and Lee’s shared hunger.

Despite Maren’s desire to find her mother, Bones and All moves at a leisurely pace that makes its connection and debt to the great American road movies of the past undeniably clear. Atticus Ross and Trent Reznor’s uncharacteristically acoustic, plucking score only further drives home Bones and All’s connection to films like Paris, Texas, which relies just as heavily on Ry Cooder’s folk music to set its warm, aching mood as it does on Robby Müller’s customarily resplendent cinematography. To the film’s credit, Bones and All may even be the most visually stunning exploration of rural America since Müller and director Wim Wenders made their fateful trip to the states back in 1984.

BONES AND ALL | Meet Lee – Featurette

Guadagnino and cinematographer Arseni Khachaturan not only fill Bones and All with gorgeous, sun-drenched frames but also highlight the mundanity of rural American architecture and life. All the film’s houses seem to creak and shudder beneath the weight of their shoddy construction, and Guadagnino effectively juxtaposes the haunted atmosphere of Bones and All’s old houses, factories, and mental hospitals with the freedom offered by America’s midwestern plains.

In a film that’s so often about the search for freedom and comfort, it’s no mistake that Bones and All frequently returns to images of its two protagonists sitting totally relaxed together amid the wide expansiveness of Ohio’s seemingly endless fields.

What Bones and All has in its gorgeous textures and compositions, it ultimately lacks in intensity. The film’s script is meandering and listless, which might not be an issue were it not for the tragically brutal direction that Bones and All ultimately takes. Tonally and structurally, Guadagnino tries to split the difference between an American road movie, YA romance, and body horror film, but the film often presents itself and its story in such a nonchalant, unassuming fashion that it ends up coming across as emotionally flat.

Part of that is due to the fact that Chalamet feels woefully miscast as Lee. The actor’s previous collaboration with Guadagnino established him as a performer capable of portraying loneliness and yearning in a tender way, but both he and his director are unable to bring the same warmth and compelling internal conflict to Lee. That fact, combined with Chalamet’s inability to consistently sell Bones and All’s occasionally clunky dialogue, leaves his performance feeling strangely flat and one-note.

Russell, for her part, fares far better. As Maren, the actress brings a youthful curiosity and heartfelt warmth that both the film and its central love story desperately needs.

BONES AND ALL | Meet Maren – Featurette

Guadagnino, whether wisely or not, surrounds Russell and Chalamet with performers who go far bigger and far nastier than they do. Chief among the film’s supporting players is Mark Rylance, whose turn as a socially awkward cannibal named Sully alternates between a kind of pathetic neediness and terrifying obsessiveness. Michael Stuhlbarg, meanwhile, nearly steals the entire film in a scene that gives him the chance to show up wearing nothing but denim overalls and deliver a monologue about the pleasures of devouring another human being while lit by the haunting amber light of a nearby bonfire.

BONES AND ALL | Theatrical Trailer

It’s in Stuhlbarg’s one scene that Bones and All is at its most dangerous and perverse, and that’s why it lingers so much longer than the rest of the film, which despite all of its moments of flesh-tearing cannibalism, lacks any real bite.

Bones and All is playing in theaters now.