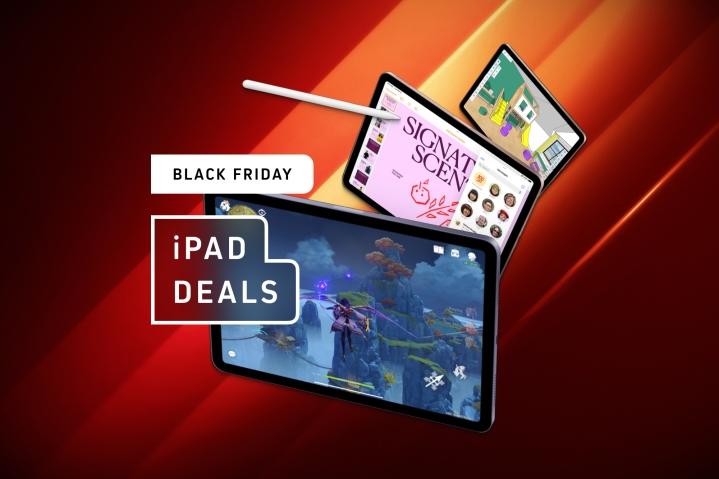 Black Friday iPad deals aren’t just about tablets, but also accessories that enhance your tablet time. The Apple Smart Keyboard Folio for iPad Pro 11-inch neatly works as both cover and keyboard for your iPad Pro 11-inch. It’s compatible with the 1st generation or later as well as the iPad Air 4th and 5th generation. With a front and back cover, it keeps your iPad safe while also making it easier to type than relying on a touchscreen interface. There’s no need to charge or pair it either.

The Apple Smart Keyboard Folio for iPad Pro 12.9-inch provides both cover and keyboard for your larger iPad Pro 12.9-inch. All you need to do is attach it to your tablet with no need to pair it or even charge it. From there, you get all the benefits of a keyboard saving you the hassle of using the touchscreen to type long documents. It also doubles as a cover with protection on the front and back ensuring your iPad Pro 12.9-inch looks as good as it did the day you bought it.

The Apple iPad 10.2 is a fairly respectable entry point for anyone looking to buy one of the best tablets while still keeping costs lower than elsewhere. It has a gorgeous 10.2-inch Retina display with True Tone support so whether you’re browsing online, watching a show, or playing a game, it looks great. The tablet has an A13 Bionic chip which may be aging but still offers strong performance for the price. It also has 64GB of storage space, an 8MP wide back camera, 12MP Ultra Wide front camera with Center Support (vital for taking video calls), and stereo speakers. Up to 10 hours of battery life means it’s reliable all day long too.

One of the best Apple Black Friday deals around, the Apple iPad Mini is an utter delight to use. It’s small yet mighty. Its 8.3-inch Liquid Retina display with True Tone and wide color support means it looks fantastic at all times. Its A15 Bionic chip is remarkably powerful so you can play all the latest games from Apple Arcade and multitask at speed. A 12MP wide back camera is useful for occasional snaps while a 12MP Ultra Wide front camera with Center Stage support ensures you stay the focus of any video call. Landscape stereo speakers help with the professional edge here, while there’s up to 10 hours of battery life to keep it going all day long.

The Apple iPad Air tops our look at the best iPads for many different reasons. It’s effectively the best choice for anyone that doesn’t need the potential overkill of the iPad Pro range. It uses Apple’s M1 chip which you see in many MacBooks so it’s truly powerful. A 10.9-inch Liquid Retina display has True Tone and P3 wide color support so it looks fantastic. That goes for any lighting situation too thanks to its antireflective coating. A 12MP wide camera is useful for snaps while there’s a 12MP Ultra Wide front camera with Center Stage support. Stereo landscape speakers round things off nicely for what’s easily one of the most tempting Black Friday iPad deals around.

One of the ultimate Black Friday iPad deals around, the Apple iPad Pro 12.9-inch is overkill for some users but there’s really nothing else quite like it. It uses Apple’s latest M2 chip which you’ll see on its latest MacBooks and the performance is truly phenomenal. It’s excessive for casual use but if you need a tablet with performance on a par with a laptop, the Apple iPad Pro 12.9-inch will serve you well. Its 12.9-inch display is a Liquid Retina XDR display with ProMotion, True Tone, and P3 wide color so there’s nothing quite like it visually either. Camera-wise, you get a 12MP Wide camera, 10MP Ultra Wide back camera, and LiDAR scanner for immersive AR. At the front is a 12MP Ultra Wide front camera with Center Stage support for video calls. All-day battery life and extensive accessory support including for the latest Apple Pencil, Magic Keyboard, and Smart Keyboard Folio ensure this is an investment that can revolutionize your workflow.