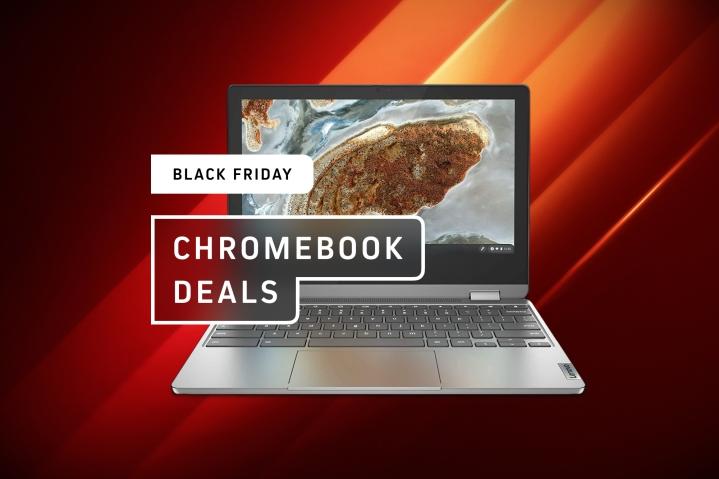 Black Friday is still a few days away on the 25th, but retailers like Best Buy have already started releasing some excellent Chromebook deals to pick up for as cheap as $79. That means you don’t have to deal with the usual rush of Black Friday and can instead pick something up now and then sit at home waiting for it rather than slogging through the flash deals and anxiety of grabbing something quickly. So, let’s look at what sort of Chromebooks are available, and while you’re at it, be sure to check our roundup of the best Black Friday laptop deals for some alternatives.

While there are a lot of cheap Black Friday Chromebook deals floating around, you’ll be hard-pressed to find a cheaper one than this Lenovo Chromebook 3. It’s impressive to see a functional computer below $100, and while it isn’t going to win any awards, it’s enough for general use. The Intel Celeron Celeron N4020 and 4GB of memory are very much entry-level, but they’re good enough for running Chrome OS and getting you by daily. The same goes with the 11.6-inch screen, which makes the Chromebook 3 easy to put in a bag, and its 2.42 pounds of weight means you won’t feel like you’re carrying a brick. Battery life is slated at around nine to ten hours, although that will vary depending on how high you run the brightness. Either way, it’s a great little device that’s both budget-friendly and good enough for day-to-day usage.

Of course, if you want a bigger screen and slightly better specs, Lenovo also makes the 14-inch version of the same Chromebook. It’s almost double the price but comes with a Mediatek MT8183 CPU and 4GB RAM. Again, it isn’t going to win any awards, but if you want one of the best cheap Chromebook deals, this is the one to go for since it gives you a larger screen and a bigger keyboard to work with. Plus, you get slightly better audio, although the battery life runs roughly the same as the smaller Lenogo Chromebook 3 at 10 hours and will vary depending on brightness. As for internal storage, you get 64GBs, but you can supplement that with one of these cloud storage services to make life a bit easier.

Moving up a notch in specs and quality, we have the ASUS 2-in-1 Touchscreen Chromebook, and it’s not that much more expensive than the Lenovo Chromebook 3. The Intel Core M3-8100Y is still an entry-level CPU but can handle the FHD resolution and the nice touchscreen experience. Even better, you get 8GB of RAM, which we prefer to see as the minimum included spec, plus ASUS throws in Wi-Fi 6, making the Chromebook future-proof while providing you with a stable wireless connection, which you’ll need since there’s no ethernet port. The only remaining downside is the 64GB of storage, which isn’t necessarily a dealbreaker, especially since you can grab one of these external hard drive deals for extra storage.

If you need more processing power, this 15.6-inch Samsung Chromebook runs an Intel Celeron N4000, which means you can run a couple of different productivity apps without worrying about weird lag spikes. It also lives in the Samsung Chromebook family that’s found its way on our list of best Chromebooks. That said, you only get 4GB of RAM, so it’s a compromise when moving up to it. Nonetheless, you get a large 15.6-inch FHD display, a larger keyboard, and a built-in MicroSD reader. The Intel UHD Graphics 600 will also let you get away with some casual gaming, and the 128GB storage will give you some maneuvering room with your file storage. We also like that it only weighs 3.75 pounds and is 0.6 inches thick, making it light, thin, and easy to carry around, even though it’s bigger.

The Asus 17.3-inch Chromebook has a lot of similarities with the 15.6-inch Chromebook from Samsung, such as the Intel Celeron N4500, which is a bit more powerful, but not by much. You also get the same 4GB of RAM, but only 64GB of storage, so you’ll have to pick up an external hard drive or extra cloud storage. What you get in return is a massive 17.3-inch FHD screen and a larger keyboard, making it great for those who do a lot of writing. It also comes with an SD card reader that supports various types, Wi-Fi 6, which we love, and a total of four USB ports two work with; two USB-C and two USB-A. It’s a bit on the heavier side at 5.34 pounds, but it’s still under 1 inch in thickness, so it’s still not too bad to carry around. All that said if you want a large screen but with more robust specs, check out this roundup of the best 17-inch laptop deals.

We’re big fans of the Acer Chromebook Spin 514, especially since it’s the first entry on this list to come with a desktop-grade CPU, the AMD Ryzen 3 5125C. That means it can handle a lot more productivity and processing work, plus the integrated GPU will also let you get away with more casual games than previous entries. The overall build is also excellent and exceptionally rugged, with reinforced edges and Gorilla glass for the FHD touchscreen. It’s also an IPS panel, so you have wider viewing angles and better color reproduction; plus, you can spin it 360 degrees and use it in tablet mode, which is excellent. You also get 8GB of RAM and 128GB of storage, so the Acer Chromebook Spin 514 is as close as you’ll get to laptop deals while still being a Chromebook.

The Duet 5 is a substantial upgrade on the Duet 3, which was already a relatively great Chromebook. So what do you get? Well, you have an absolutely gorgeous 13.3-inch OLED FHD screen for bargain bin prices, which we don’t often see. The keyboard is also much larger and doesn’t feel as cramped; plus, it’s included in this deal, so you don’t have to spend anything extra. The CPU is a Snapdragon 7cG2, a mobile CPU that is still relatively powerful and more than enough for comfortable day-to-day use. 8GBs of RAM and 128GB of storage also mean you aren’t going to be constantly bumping up the limits of the Duet 5. It even has Wi-Fi 6, which it didn’t when it was initially released, so this is truly an excellent Chromebook and one of the best Black Friday deals; if you want something you can use as a tablet too.

The Galaxy Chromebook 2 is what you get when you let Samsung do its thing and create an excellent product. Its biggest standout feature is the 13.3-inch QLED screen that runs FHD, making it a superb Chromebook for watching films, shows and browsing online. You also get a desktop-grade Intel Core i3, giving you more processing power for productivity and editing work. It also helps give you an overall smoother experience when using Chrome OS. The build is also impressive, and while it’s a bit boxy, it’s still sleek looking and ruggedly built, so you don’t have to worry about carrying it around with you. You get 8GBs of RAM and 128GB of storage, which is more than enough for most folks, and Samsung has even thrown in Wi-Fi 6 and a whopping 13-hour battery life, making this one of the best Chromebooks on the list.