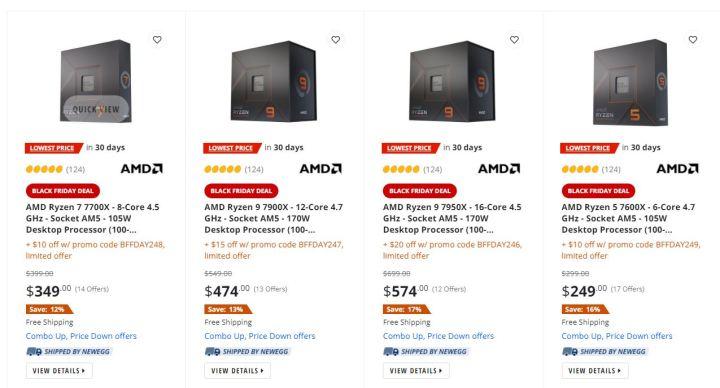 In an unexpected twist, AMD’s latest and greatest processors are now on sale, and the savings are huge on some of the models.

All four of the Ryzen 7000 CPUs are discounted, making them highly competitive against Intel’s Raptor Lake chips.

The first of the best Black Friday deals have already started rolling in across many U.S. retailers, but we must admit we didn’t expect to see price cuts on the Ryzen 7000 processors so soon. This doesn’t seem to be an official AMD discount, though, but many retailers have already lowered the prices, including and . Let’s see what’s up for grabs.

It’s not often that the newest chips get discounted, and in the case of the flagship Ryzen 9 7950X with 16 cores, 32 threads, and a whopping 80MB cache, as well as clock speeds reaching as high as 5.7GHz, the price cut is huge — you’re saving $125 if you shop now.

These discounts might help AMD get an edge over Intel, although Intel Raptor Lake processors have also been discounted on , albeit not so massively. If you’re going for a budget-friendly, value-oriented build, AMD just might be the way to go this time around.

AMD, in general, seems to be aiming to improve its performance-per-dollar ratio instead of just pushing for raw performance numbers the way Intel and Nvidia sometimes tend to do. The upcoming AMD Radeon RX 7900 XTX has been priced at a more reasonable level than Nvidia’s RTX 4080, and this could certainly help Team Red win some more of the market share in the GPU department. Let’s see if these AMD CPU discounts will help it compete against Intel too.