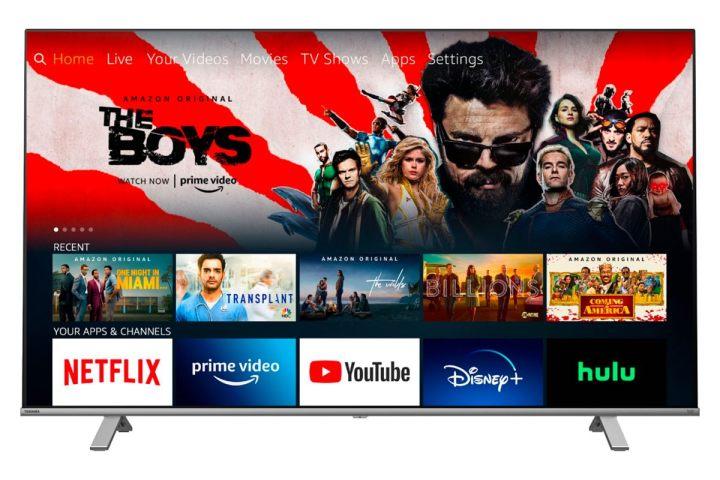 If you’ve been itching to grab a new screen for your home theater setup, Black Friday deals are here to help. You can grab cheap Black Friday TV deals already, even though we’re still a week out from the official date of the shopping holiday. A 55-inch TV is perfect for any casual living room TV. It’s big enough to make movie nights immersive, but not so big that it dominates the room when you’re not using it. We’re rounded up the best 55-inch TV Black Friday deals from brands like Samsung, LG, Toshiba, TCL, and more.

The Toshiba C350 is a fantastic budget TV. It runs at 2160p, which is the same Ultra HD resolution that many high-end TVs run at, and has a few bells and whistles besides. It has a 60Hz refresh rate, so your movies, sports and games will look nice and smooth. It supports Dolby Vision and HDR 10, so you’ll have a crisp image. It’s cheap price comes from not having much oomph in the processor and using a standard LED light panel. If you’re not looking for anything heavy duty, this budget TV will check all the boxes you need. It even made it onto our list of the best 4K TVs under $500.

Samsung has a reputation as one of the best TV manufacturers on the market, so you know you’re getting quality even when you go for a budget option. This is a fairly standard 4K TV with the Samsung stamp of approval. It runs at 2160p resolution and has a 60Hz refresh rate. It supports HDR10+, so you get crystal clear images. It even upscales all of your content to 4K, so even older movies and TV shows will look great. It’s a smart TV, so you can stream content straight to it without needing a Fire TV Stick or Apple TV.

Hisense is a big player in budget TVs, partly because of its proprietary technology, ULED. The Quantum ULED system is similar to QLED, but it’s made up of several backlit LED panels. These enhance the standard LED experience without getting quite to the level of QLED. This TV does have a huge color gamut, and several local dimming zones, so you’ll get nice contrast and deeper blacks than a standard backlit LED TV. It uses Roku for its smart TV platform, meaning you can stream from dozens of different apps without any external devices.

The X75K is a gorgeous if simple TV that will make anything you watch just a little bit more dynamic. It runs at the standard 2160p resolution with a 60Hz refresh rate. Where the X75K really shines is its processor. The 4K Processor X1 enhances colors and contrast on everything you watch, so older movies get just a bit more of a pop. It even upscales low-resolution content into 4K. On top of all that, it uses Google as its smart TV program, so it will integrate seemlesly with other smart home tech you have around the house.

If you want to bump things up a notch from LED (or the somewhat anomalous ULED), look into a QLED TV. This option from Samsung is a great starting point. QLEDs use very small quantum dots to increase the range of colors and the contrast you can get in a single image. The Q70A has some nice additions, like separate light panels for cool and warm colors, so you ensure you get the full contrast between the two. It also has some special modes for gaming, like an Ultrawide GameView mode that makes the aspect ratio as wide as 32:9.

Samsung’s The Frame TV is a unique beast. It’s a gorgeous TV on its own, but it specializes in a unique niche. On its surface The Frame TV is a quality QLED TV, running at 2160p resolution and a 60Hz refresh rate. What makes it special is its Art Mode. When you’re not using the TV, you can set it to display high-quality images that you’d be hard pressed to tell aren’t actual paintings on your wall. The trick is in the matte display, which decreases glare from different angles and makes the TV look less like a pane of glass and more like the surface of an actual painting.

If you simply need the best of the best, nothing but an OLED TV will satisfy. OLED pixels have their own light sources, so when they need to show perfect blacks, they just shut themselves off completely. You won’t see better contrast on a regular LED or QLED TV. The LG B2 has a powerful processor equipped with AI that will optimize everything you watch to the crispest image quality and best contrast available. It has various bells and whistles like 4K upscaling, tone mapping for color enhancing, and Dolby Vision and Dolby Atmos for high-quality visuals and sound.