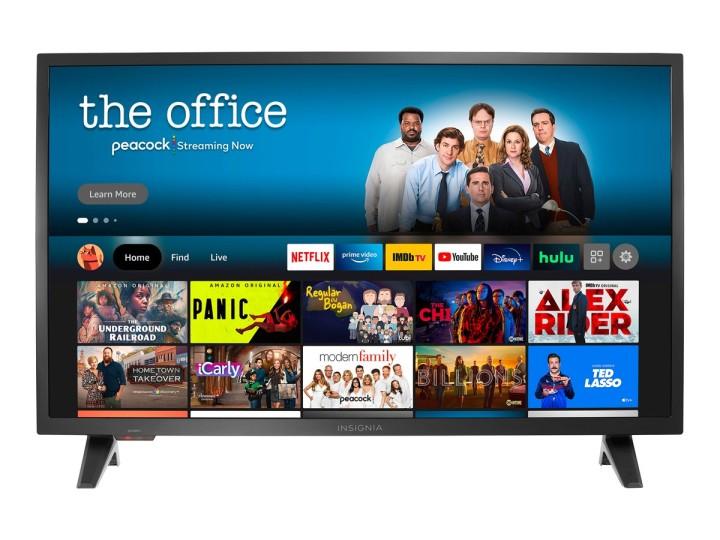 Black Friday isn’t until November 25, but many retailers have started the sales festivities early, allowing customers to beat the rush and guarantee themselves some Black Friday discounts right now. This is worth capitalizing on if you’re in the market for a TV for an apartment or smaller space, as many of the best Black Friday deals are on 32-inch TVs. In fact, there are so many available right now that we’ve done the heavy lifting of rounding up the best Black Friday TV deals on 32-inch TVs right here. Read onward for more details.

One of the prime reasons for owning a smart TV is being able to go without potentially expensive external streaming devices, and the Insignia F20 HD Smart TV delivers. With Fire TV support, it gives you access to over one million streaming movies and TV episodes through popular streaming platforms such as Netflix, Apple TV, Prime Video, Disney+, Hulu, Sling TV, YouTube, HBO Max, and many more. It has DTS TruSurround, which creates an immersive surround sound experience, and its combination of smart features and immersion make it a great TV to break in with the best new movies to stream on Netflix, Hulu, Prime, HBO, and more.

The Hisense 32-inch HD Smart TV gets you into the world of the smart TV at an incredibly modest price. In fact, it comes loaded with more technology than most people would expect to find at such a low price point. It has a voice remote with quick access to Google Assistant, and Chromecast is built right in as well, which allows you to stream photos, movies, apps, games, and other content from your phone, tablet, or laptop directly to the TV. It has a sports mode that automatically adjusts to optimize picture quality, and a game mode that gamers will love. With the inclusion of Android TV, you can choose from over 700,000 movies and TV shows across all of your favorite streaming platforms to watch.

The Sony W830K HD LED Google TV offers the chance to rediscover the excitement of movies and games with HDR technology, which boosts dynamic range and picture quality in ways you won’t find in most HD TVs. HDR contrast is powered by X-REality PRO technology, which presents a high-definition picture full of rich, real-world detail and texture with reduced noise. Because it has Google TV built-in, it’s able to organize your favorite content all in one place, and it even has access to Google Assistant. It also has built-in access to streaming platforms such as Netflix, Disney+, Apple TV, HBO Max, Amazon Prime Video, Peacock, and many more.

Like all of the best TVs, the Samsung Q60A QLED Smart TV delivers stunning 4K picture quality which brings four times the resolution of HD to your home theater. It even has the ability to upscale older content into 4K, instantly transforming everything you watch into the modern clarity of 4K. It has plenty of technology on board, including QLED picture technology and Quantum HDR, which unveils a wider range of color, brightness, and contrast that produces images far superior to HD. It has the usual access to streaming platforms that you find on any smart TV, as well as next-generation apps, advanced controls, and compatibility with voice assistants.

Samsung’s The Frame TV brings the impressive picture quality you’d expect to find in many of the best QLED TVs. QLED and OLED are two of the highest-quality picture technologies available right now, so this TV makes a great option if that’s what you’re after. It’s also a unique TV, as it’s designed to resemble art hanging on the wall, and its minimalist design will fit into any home theater or living room environment. It even has an Art Mode that can display artwork when you aren’t watching TV. You can curate your own photos and art or choose artwork from the Art Store, which has more than 1,400 new and classic works of art to choose from. This TV is good for minimalists and for minimal spaces, as it has changeable bezels that attach magnetically, and a single slim cable is all the TV needs.