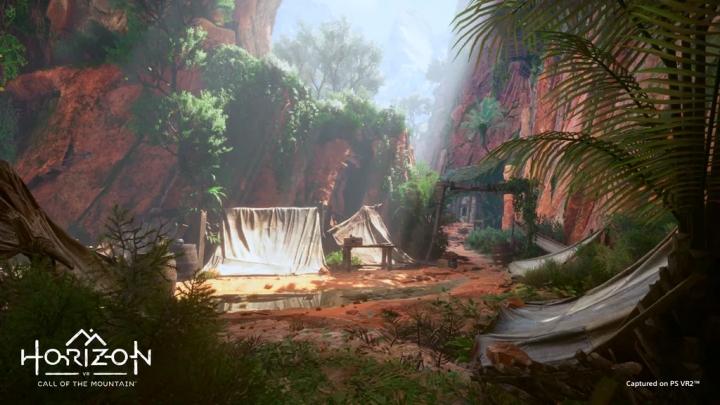 The world of Horizon has always been a visual and technical spectacle unlike any other. Seeing the massive robotic dinosaurs move with intricate and detailed parts and designs in the lush, overgrown world of the post-apocalypse through both the original game and its sequel marked some of the most impressive sights we’ve seen on our PlayStation consoles. Now, however, Guerrilla Games and Firesprite have concocted a new way to really appreciate and immerse ourselves in the dangerous world of Horizon.

Horizon: Call of the Mountain will be a departure from Aloy’s adventures that the first two games focused on, but it is much more of a change in perspective from just which character we will play as. This was among the first games ever announced to be coming to the unreleased PlayStation VR 2 and will give a whole new sense of scale to fighting these giant robots. VR games are still somewhat in their infancy, with many games still experimenting with how to handle basic gameplay concepts. For all the details on how Horizon: Call of the Mountain will work when you enter a world full of rabid robots, here’s everything we know about this upcoming PS VR 2 title.

Horizon: Call of the Mountain was one of the first games we saw for the PS VR 2 and was rightly assumed to be a launch title. The game will come out with the system on February 22, 2023.

Horizon: Call of the Mountain will be a PS VR 2 exclusive. You’ll need a PS5 and the PS VR 2 headset to play it.

Sony has been moving more toward porting their games to PC, and there are no obvious reasons why Horizon: Call of the Mountain couldn’t also run on a PC VR unit, so there is a possibility that one day this game will hit PCs as well.

The first trailer we got for Horizon: Call of the Mountain was just a teaser. It opens with a lengthy speech by Guerilla’s Studio Director before Horizon: Forbidden West even launched. He tells us they are working on this new experience that is meant to really show off the power and potential of the PS VR 2. What we see of the actual game is a short scene that would obviously be more impressive in VR itself of three people floating down a river as a Tallneck walks directly over them before cutting to the title.

Our second trailer wasn’t much longer but fully focused on showing the game in action. Here, we finally confirm that we won’t be playing as Aloy, the protagonist of the mainline games, but as a new character named Ryas. We start off in the same boat scenario, getting a nice and up-close look at some peaceful robots until the trio is attacked by a Snapmaw and their boat flipped. We hear some voices talking about the potential for Ryas to redeem himself over something in his past by figuring out why the machines are hostile, and there are also some jaw-dropping vistas the series has always been so proud of.

Reyas is a former Shadow Carja Warrior Warrior looking to redeem himself after a troubling past. He is offered freedom in exchange for volunteering to investigate a threat to the Sundom. According to an official blog post, new and old characters, including Aloy, will appear in this new adventure.

Horizon: Call of the Mountain looks like it follows your typical VR experience. We see the new protagonist Ryas riding on a boat like a guided tour but also doing a lot of manual movements. Expect to use your hands to climb a lot, including rock climbing using pickaxes, and even zip-lining just like Aloy would. There are also moments of swimming, rope climbing, and leaping to ledges, which look slightly odd with your floating hands.

In terms of combat, you could probably guess that the bow would be an obvious choice. You will need to use one hand to load arrows onto your bow, draw, and fire it at your target. In the trailer, we see combat against plenty of robots, but no humans so far. There also appears to be a dodge mechanic of some kind, though it isn’t clear how it will work exactly. We see Ryas holding pickaxes while not traversing as well, which might imply that there could be melee combat options, but for now, we’ve only seen bow action.

It was also announced that Horizon: Call of the Mountain would have a special “River Ride experience” that removes all combat and simply lets you enjoy a guided, on-rails tour of the majestic world of Horizon — almost like a robotic version of Jurassic Park.

While plenty of VR games have multiplayer support, it is tricky. For Horizon: Call of the Mountain, nothing shown in trailers indicates that multiplayer will be included in any way, which makes sense for a series that has never had a multiplayer element up until now. Everything shown has looked very story-driven and without much room for a second player, and it wouldn’t make sense for a game like this to have a bespoke competitive mode or anything like that.

Once it is confirmed if you can play Horizon: Call of the Mountain with or against other people, we’ll let you know.

Horizon: Call of the Mountain is now up for preorder. You can either preorder the game by itself for $60 or get it in a bundle with the PS VR 2 unit for $600.