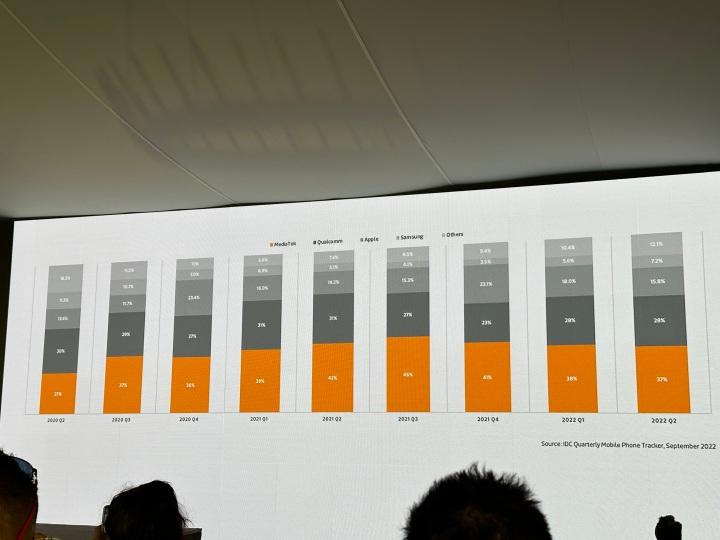 What kind of chipset is in your phone? If you’re reading this article, chances are you know the answer right off the top of your head. Maybe it’s a Qualcomm Snapdragon 8 Gen 1, Google’s Tensor G2, or an A16 Bionic in your brand new iPhone 14 Pro. Or, just maybe, it’s one with a MediaTek logo on it.

MediaTek isn’t a company we talk about often when discussing U.S. smartphones, but it’s one we most certainly should. I recently attended MediaTek’s Executive Summit in Sonoma and had a chance to sit down with the company’s Deputy General Manager of its Smartphone Business Unit, Yenchi Lee. I’ve come away from the Summit with a renewed appreciation for MediaTek’s stealthy success over the years, as well as greater excitement about where it could go in the future.

It’s easy to think Qualcomm has a total stranglehold on the market when it puts flagship chips in the Galaxy S22, OnePlus 10 Pro, and other phones, but MediaTek has a strong foundation as the #1 chipset for Android phones in the U.S. You may not see MediaTek chips in buzz worthy phones from Samsung or Google, but its focus on mid and low-tier handsets is a strategy that clearly working — very well.

How’s MediaTek doing it? It’s a MediaTek chip you’ll find in a Galaxy A32, OnePlus Nord N300, or the most recent Motorola Edge. They aren’t phones that get the most attention in the tech news spotlight, but they’re ones “normal” people are buying  — lot of.

And MediaTek isn’t stopping with phones from those well-established brands. Speaking with Yenchi Lee about MediaTek’s approach to getting MediaTek chips into even more smartphones, he told me, “We [MediaTek] are actually working with all sorts of smaller brands as well… We are [also] talking to many other new brands right now.” Lee wouldn’t confirm which brands those are, but it’s an important comment regardless. MediaTek’s mobile business is already in a strong place, but that’s not stopping the company from reaching out to more smartphone brands and expanding its reach even further.

The flagship MediaTek push we’ve been waiting for

But why is that exciting? That’s likely good news for MediaTek’s bottom line, but how is that going to impact you and me? In addition to more mid-range MediaTek chips making their way to U.S. smartphones, we may soon see a day when MediaTek’s flagship technology makes a Stateside appearance as well.

There’s just one big uncertainty looming over it: availability. Last year’s Dimensity 9000 chip was also incredibly powerful, but beyond a handful of handsets from the likes of OnePlus and Xiaomi, it had an extremely limited release. Will the Dimensity 9200 see a similar fate?

Lee doesn’t think so. “The flagship segment is still the thing we want to tap into. We’re happy to work with OEMs, and hopefully, the next year or the year after — we don’t know yet — they will be able to bring our flagship 9200 into U.S. markets,” said Lee.” It’s something we’re working on, and we are not stopping there.” MediaTek’s Senior Media and Analyst Relations Manager, Brad Molen, also made a good point about the Dimensity 9200’s mmWave support, noting “Having mmWave in the 9200, I think, will certainly help with the appeal to U.S. markets.”

A big focus for MediaTek as we end 2022 and go into 2023 is making the world more aware of its business beyond smartphones. When MediaTek comes up in conversations, it’s often about one of its smartphone chips. And while those are important, MediaTek wants to raise greater awareness about everything else it does, which admittedly, is a lot.

In 2009, MediaTek’s business was largely dominated by three main niches: PC, consumer, and a catch-all “others” category. By 2026, MediaTek envisions itself being spread much more equally across consumer, industrial, PC, mobile, and other areas. And while MediaTek’s gone from being a $228 billion business in 2009 to an estimated $780 billion one in 2026, its mobile work has shot up from 6% to 13% of its operations.

Those numbers are important because they signal that MediaTek isn’t stepping away from the mobile space any time soon. While the company’s slogan for the next year is “more than mobile,” Lee made it clear that “more than mobile” doesn’t mean MediaTek is lessening its mobile focus, it simply wants folks to know that it isn’t just a mobile company.

“Mobile is still our first priority and what drives our future,” said Molen. “Obviously there are other areas where you saw that. VR, automotive, Wi-Fi 7, 5G, and all of that.”

“But we just need to have different applications, different customers. So that when we present MediaTek as a whole company, they will be able to see that we are in different spaces,” he said. “Although mobile has still been heavily mentioned, gradually we want to see more devices like PSVR, TV. And hopefully in the future we will have some more news to announce.”

Will 2023 be the year that MediaTek becomes just as synonymous with flagship smartphones as Qualcomm? I’m not really sure, but I also don’t think MediaTek cares about that.

MediaTek certainly wants its mobile business to be as large as possible, and if it gets to a point where a MediaTek chip gets as much buzz and attention as a new Snapdragon one, great! But MediaTek’s clearly doing just fine with its less flashy approach to mobile, and I can’t say I fault the company one bit for that.