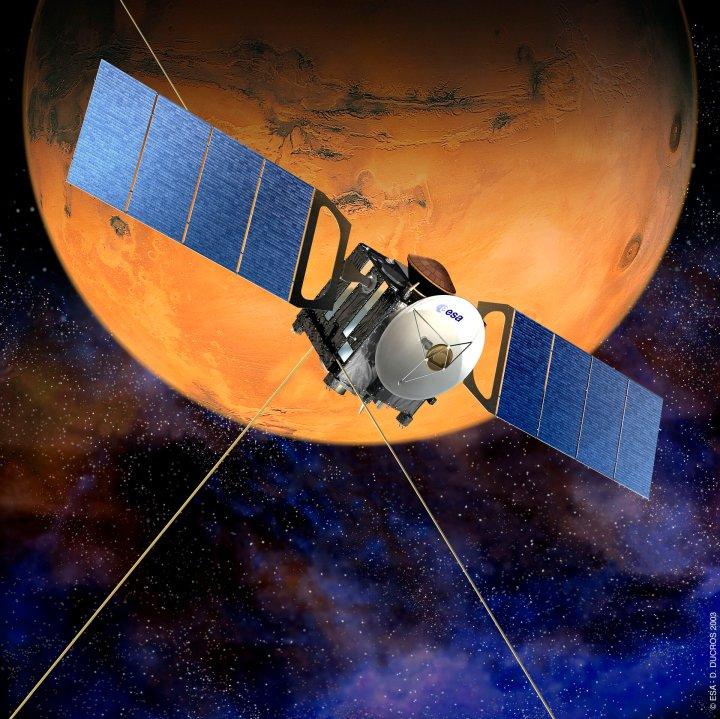 When a rover is exploring the surface of Mars, it doesn’t send data straight back to Earth. That’s for two reasons: Firstly, it would require a large, powerful antenna which would be cumbersome and expensive to add, and secondly, because of the rotations of Earth and Mars any location on the surface would be pointing in the wrong direction some of the time.

So, to get data back from Mars surface missions, we use a network of Mars orbiters, which collect data from rovers and landers and relay it back to Earth. Known as the Mars Relay Network, these orbiting spacecraft take on relay duties in addition to their scientific roles observing the red planet. Recently, one of these orbiters, the European Space Agency (ESA)’s Mars Express set a new record for relaying data from seven different Mars surface missions.

Since its arrival at Mars in December 2003, Mars Express has relayed data from six NASA surface missions (four rovers and two landers) and one Chinese rover. Spacecraft operating on Mars are designed to be interoperable with their radio communications, so surface missions and orbiters built by different agencies can communicate with each other. This level of international cooperation means that data from a rover can be relayed by whichever orbiter is nearest, even if it is from a different country.

“Data relay is an essential part of Mars exploration,” said James Godfrey, Mars Express spacecraft operations manager at ESA’s ESOC mission control center, in a statement. “We are proud that Mars Express has played a role in the interagency Mars data relay network over many years and has supported so many surface assets. This network will be vital to support future missions to the Red Planet, such as those of the Mars Sample Return campaign.”

Mars Express has relayed data from NASA’s small Spirit and Opportunity rovers, which studied the geology of Mars up close from the Phoenix and InSight landers. Those landers studied the history of water and interior of the planet. Data has also been relayed from the Curiosity and Perseverance rovers, which are currently searching for evidence of ancient life there. Last year, Mars Express also performed a communication test with the Chinese Zhurong rover, testing out a new technique for sending data in a one-way vs. two-way manner.