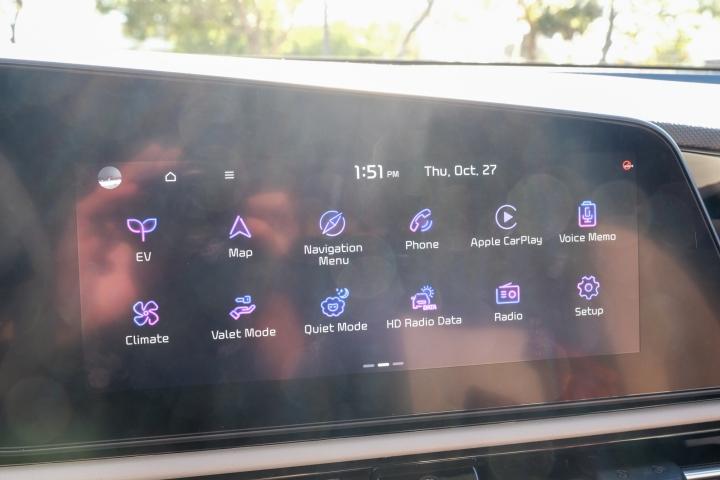 Let’s be honest — the infotainment system in your car probably sucks. Built-in car infotainment systems are notoriously slow, unresponsive, and confusing. That’s given rise to systems like CarPlay and Android Auto, which essentially act as projections of your phone, allowing you to play your music, access maps, and more, without the need to navigate your car’s own software. I hope those continue to grow in popularity and in how widely they’re supported — but until then, Kia and Hyundai actually have a decent infotainment system on their hands.

Perhaps much of what I like about this infotainment system stems from the fact that the experience of using is quite similar to that of using a phone. The home screen, which shows when you turn on the car, isn’t all that interesting beyond showing a few bits of information, but, swipe right, and you’ll straight to a grid of what looks a whole lot like apps. From these icons, you’ll be able to dive straight into different settings, your maps, and more.

So what kind of “apps” are there? Well, you can dive into the “Map” app, the “Phone” app, or the “Setup” app. Most of the apps are well-labeled and do exactly what you would expect them to do. Some of them, like the “EV” app, are a bit more nebulously named — but with information about how much range you have left and settings about charging speed, I find that it pretty much makes sense.

Now let’s not pretend that, for example, the mapping feature built into the EV6 is actually good compared to the mapping apps on your phone. It’s still a little dated-looking. But it does react pretty much the way you’d expect it to. It shows businesses near you, lets you easily search for destinations, and pulls up recent destinations when you open it, which is handy.

It’s not just that the interface itself is better than others. It’s also that it kind of acts like one. How so? Well, unlike other carmakers, Kia and Hyundai’s infotainment system seems to react to touch relatively quickly. Sure, it’s not as responsive as a solid smartphone, but it generally takes only a split second to open menus and load new screens, which is super handy.

Of course, it’s important to note that this has less to do with the design of the software, and more to do with the processing power under the hood. If one of these cars were to offer a less powerful processor, the infotainment system may look the same, but not act as responsively.

I’m glad these cars do offer enough power to make for a responsive-enough user experience. After all, having to wait for a second every time you touch the screen and be dangerous, especially when paired with an infotainment system that takes too long to load.

I’m not trying to argue that this infotainment system is great. On the contrary, compared to the smartphone and computer operating systems we’re used to, it needs a lot of work. It just needs less work than many of the others out there.

Regardless of how much work it needs, most of Kia’s and Hyundai’s cars support Apple CarPlay and Android Auto — despite the fact that for some reason they simply refuse to offer wireless connectivity. It’s possible that one day these carmakers will adopt either Google or Apple’s full automotive infotainment systems, which will likely offer a radically improved software experience over what they have now.

But until then, and even if you didn’t use CarPlay or Android Auto at all, you can absolutely get by with the infotainment system these cars have right now. That’s more than many other automakers can claim.