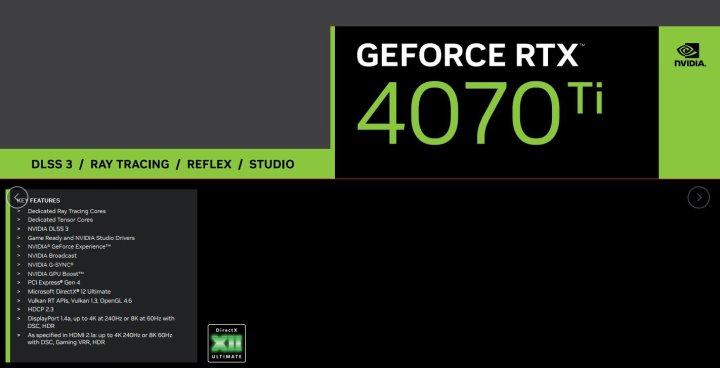 According to a new leak, Nvidia may soon launch another graphics card — the RTX 4070 Ti. Set to arrive on January 5, the GPU should be well-positioned to rival AMD’s Radeon RX 7900 XT.

Even if the rumor proves to be true, we’re still left with even more questions. Is this a new GPU or is Nvidia’s canceled RTX 4080 12GB making a quiet comeback?

While the graphics card in question is said to be the RTX 4070 Ti, all signs point to it being the ill-fated RTX 4080 12GB. Nvidia first announced the card alongside the upcoming RTX 4080 16GB, but it wasn’t well received — it was priced too high for the specs it offered.

On the other hand, Nvidia was already pretty deep into the release of the RTX 4080 12GB when it decided to pull the plug. Calling off the launch will likely cost Nvidia a pretty penny, and that cost would be much, much higher if Nvidia axed it entirely. It’s very likely that the RTX 4080 12GB will be back, except it will be rebranded as the RTX 4070 Ti. Of course, treat all of this as speculation until we see a spec sheet for the rumored RTX 4070 Ti — it might be a different GPU entirely, however unlikely that might seem.

Let’s get back to the RTX 4070 Ti. Twitter leaker MEGAsizeGPU shared an official-looking slide that points out some of the top features of the card, noting that it’s the RTX 4070 Ti. The leaker added that the planned release date is January 5, 2023, just a few weeks after AMD releases its new flagships.

Unfortunately, we don’t know the specs of this graphics card, so we can’t determine whether it’s the recycled RTX 4080 12GB or not. If it is, and it won’t receive any hardware changes, we can expect 7,680 CUDA cores, 12GB of GDDR6X memory across a 192-bit bus, a memory bandwidth of 21Gbps, and a maximum clock speed of 2,610MHz.

Assuming this is the same card with no changes made to it, we’ve already seen it in some early benchmarks. Unsurprisingly, the RTX 4090 wiped the floor with this model. Its performance ranked it somewhat close to the RTX 3090 and the RTX 3090 Ti, depending on the test; in some benchmarks, it fell far behind.