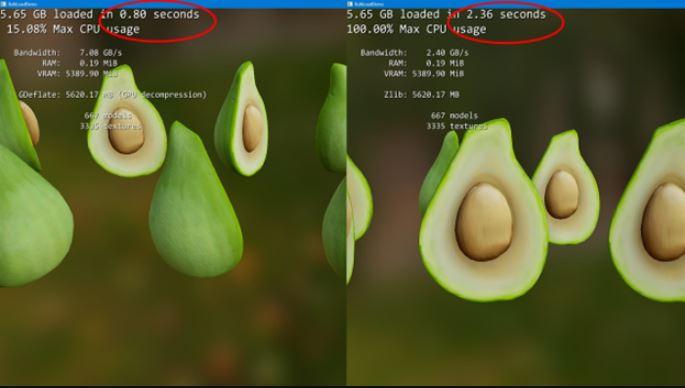 Microsoft’s DirectStorage 1.1 update is here, and it’s definitely one that gamers won’t want to miss.

With the new version of the API, Microsoft promises up to 200% faster game load times — all thanks to GPU decompression. Here’s how you can try it out for yourself.

Microsoft announced DirectStorage 1.1 a while back, talking about GPU decompression at length. This new software utilizes NVMe SSDs in order to speed up loading times in games. We have a guide on it if you’d like to read more, but to give you a quick rundown of how it works, Microsoft’s GPU decompression will re-route some tasks that are normally performed by the CPU, moving them to the graphics card instead.

In Microsoft’s own tests, asset loading time was lowered from 2.36 seconds to 0.8 seconds when GPU decompression was used. In games, DirectStorage might have a tangible effect on loading screens and asset loading times in open-world games. Microsoft also predicts that DirectStorage’s GPU decompression will slice CPU usage by up to 85%, freeing the processor up significantly.

Much like when it was first announced, Microsoft teased that there are additional optimizations for Windows 11, but the software is also available for Windows 10 users. Microsoft has also enabled GDeflate, which is a scalable data compression scheme for the GPU.

According to Microsoft, GPU decompression is available on all DirectX 12 and Shader Model 6.0 graphics cards. In order to make the most of DirectStorage, you should install games on an NVMe SSD if you have one that’s big enough.

Microsoft is also asking users to update their drivers, seeing as AMD, Nvidia, and Intel have all released their own versions of drivers that support the new software. AMD didn’t specify which of the drivers needs to be used for this, so updating to the latest version is your best bet. Intel owners should get version 31.0.101.3793, and if you have an Nvidia graphics card, pick up the GeForce Game Ready driver 526.47 (for desktops or for notebooks).

Microsoft broke the news in a blog post. Although most of the content is aimed at developers, there are some interesting tidbits that explain how exactly GPU decompression works, so check it out if you’d like to learn more about the process.